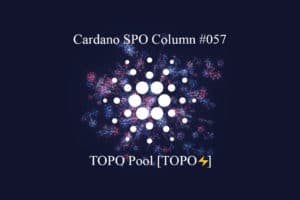 This week’s guest on the Cardano SPO Column is a stake pool operated by a founding member of Cardano Hispano and ALDEA DAO, and an active contributor in the technical community: TOPO Pool [TOPO

] is a founding member of Cardano Hispano

Hi, my name is Alfred and I’m currently living in Perú. My family and I moved down here about 3 months ago after 12 awesome years in Argentina. I’ve been working in IT since I was 15, and have always been passionate about learning cool new stuff and my “toys” (servers, networking equipment, etc.).

I am now the CEO of TOPO Labs, SPO for TOPO Stake Pool, IT Manager for an international PR company and freelance “swiss knife” for everything IT.

Why Cardano and what prompted you to become a Stake Pool Operator (SPO)?

I started researching Cardano back in 2019 but from a tech and social standpoint, the Cardano vision really resonated with me. Having lived in several countries including the US I know first hand the different kinds of struggle people have.

By the Shelley era launch I was certain that the safe and steady approach, and great team behind the project would be a game changer so I decided to launch TOPO Stake Pool to support the network and perhaps make enough to dedicate myself fulltime to blockchain development. The first 6 months were rough but we started giving back by helping others in the community with our Spanish guides and content, plus we help other SPOs secure and optimise their environment to better serve the network.

Right now we are involved in several projects building on Cardano, from NFT minting systems to BC based real estate solutions. We also work with a couple DEXes and provide free tools for the community, such as a submit-api (also linked to freeloaderz) and help educate the community in general.

You’re a founding member of Cardano Hispano. Please tell us about Cardano’s reach within the Latin American countries.

Cardano has presented itself as a very powerful tool for underdeveloped communities all around the globe, focusing in Africa especifically. However, in Latin America there are millions of people facing the same hurdles and there’s also great potential for growth. We have world class talent that needs to be cultivated and trained.

Rampant inflation, political turmoil and corruption across the continent has only served to fill a small amount of pockets at the price of undermining our countries’ growth for years to come.

Cardano and other serious cryptocurrencies are a great way to protect our savings from devaluation and DeFi opens up a plethora of options that are accessible to pretty much any individual regardless of their origin, economic or social background. This, paired with digital identity solutions such as ATALA Prism may give people who never had access to a bank account or even a government issued ID the opportunity to use the same tools an european or northamerican citizen does.

Milkomeda recently launched on Cardano. What is it and how is it helping the Cardano ecosystem? Please share your thoughts.

Milkomeda C1 is an EVM compatible sidechain that runs on milkADA (wrapped ADA), this combines a bit of two worlds, allowing Solidity developers to easily start coding and make use of the cool features the eUTXO model offers.

It also has blocks every 4 seconds or so and fees are usually below 2 cents, so there’s that too

Eventually, some other side-chains will be launched on the Milkomeda protocol, based on IELE, Solana VM, Hyperledger Fabric, etc. A very cool feature is wrapped smart contract, which basically allows to “share” or run a Plutus Smart contract and interact with both the Cardano L1 and C1 sidechain transparently.

Awesome. Any final thoughts? Where can people contact you?

I’m just grateful for the opportunity to be part of this great ecosystem and I truly believe in the long run Cardano will be one of the major players in the blockchain world. I also want to bring attention to some projects working in Argentina like WHITE pool (feeding over 400 children daily, over 1000 people in total) or ADA1’s solar farm project.

ALDEA is a DAO being built on Cardano by a group of Spanish speaking SPOs with a social orientation. It has its own treasury, it has already funded 2 social projects and aims to be a smaller scale Project Catalyst for the hispanic community.

You can find me mostly on Telegram or Twitter.

Disclaimer: The opinions and views of the SPOs are their own and do not necessarily reflect those of the Cardano Foundation or IOG