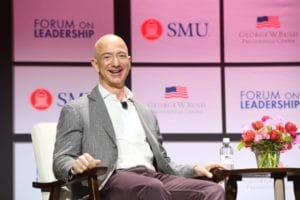 Bezos lost more than 121 billion kroner in a few hours

A record loss for Bezos, the CEO of Amazon, which comes as a cold shower after a quarterly report that already smelled like defeat

This is not a good time for Amazon, seeing how the last week has unfolded.

The quarterly results of the e-commerce giant have brought a company accustomed to winning and racking up successes back down to earth.

The results, which were below expectations, led to an initial thud on the stock exchange. In Friday’s trading, the share price dropped a whopping 14%.

This blow to the company of the second richest man in the world has cost dearly.

According to the quarterly results, Jeff Bezos’ fortune had already fallen by 191 billion kroner (NOK), or around USD 20.5 billion.

In addition to this, which is already a major setback, there has also been a downturn on Wall Street.

According to Bloomberg, the damage amounted to 121.3 billion kroner (NOK), which means that, unfortunately, 13 billion US dollars were burned in one fell swoop, including much of the entrepreneur’s personal wealth and investors’ pockets.

According to Bloomberg’s latest Billionaire Index, Jeff Bezos’ personal wealth amounts to USD 148 billion, a staggering figure that nevertheless keeps him firmly in second place in the ranking of the world’s richest people.

The race to become the first trillionaire in history is therefore paused for the CEO of Amazon in the week in which Tesla, owned by his direct competitor Elon Musk, posted a record quarterly report. One of Musk’s major market hits was the purchase of Twitter.

Since January, Bezos has lost 401.5 billion kroner of his personal wealth, making him one of the three biggest losers of the year.

Friday wasn’t just a black day for Jeff. In the elite group of the 500 richest people in the world, a total of $54 billion went up in smoke on Friday, which is a truly remarkable record.

The post Bezos lost more than 121 billion kroner in a few hours appeared first on cryptodailynews24.com.