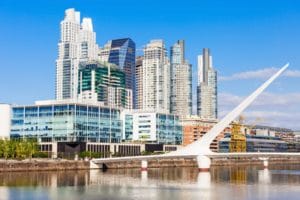 “Buenos Aires +” will allow citizens to pay taxes in crypto

Horacio Rodríguez Larreta, the head of government of Buenos Aires has announced his new plan for the Argentine capital: “Buenos Aires +”. Among the many “transformations”, there will be a digital one that will allow citizens to pay their taxes in cryptocurrencies.

In a series of tweets, Larreta outlined the various transformations he intends to implement through the new “Buenos Aires +” plan, which is aimed at making the Argentine city smarter and less bureaucratic.

Already in its second step, Larreta includes Blockchain technology in its plan, albeit for the recording of data, information and documents related to citizens.

“During 2022, we aim to integrate 14 documents into the platform, such as vaccination certificates and test results, birth and marriage certificates, and education-related documents such as high school diplomas. All this flow of data, documentation and information will be protected by Blockchain technology, which is the second major transformation we are about to incorporate into public administration. We will be pioneers in the use of this technology”.

In practice, Larreta intends to use Blockchain precisely to protect and disintermediate public administration, while also becoming pioneers in the use of the technology.

“Buenos Aires +” and the payment of taxes in cryptocurrencies

Following with his speech, in the ninth place Larreta talks about cryptocurrencies, stating that he is collaborating with leading companies to integrate them as a tax payment alternative.

“We will also work on tax payments, which is the ninth measure in our plan. Together with leading companies, we are working to allow those who wish to do so to pay their taxes with cryptocurrencies. This does not mean that the city will have cryptocurrencies in its public accounts, but that, through an agreement with virtual wallets, we will add another payment option to all the existing ones. And, of course, we will continue to work on lowering taxes”.

This is just one more method of payment than the traditional one, but it is not intended to become a new public crypto account, as is happening in El Salvador for example.

To support the whole “Buenos Aires +” plan there is also Diego Fernandez, secretary of innovation and digital transformation who, especially on the subject of crypto, a few hours ago tweeted the following:

“The future is blockchain. People will have full control of our information and give access to it to whoever they want!

The future will be crypto and all individuals will be able to save and pay as they wish”.

Argentina and Bitcoin to fight inflation

The new “Buenos Aires +” plan could perhaps be a foretaste of what could happen later on at a national level, and that is to include Bitcoin and crypto not only as a payment alternative, but precisely to fight inflation.

Argentina is a country that has been struggling with high inflation for some time, and as early as last July, Congressman José Luiz Ramon presented a bill to introduce the payment of salaries in Bitcoin and cryptocurrencies.

The following month, the country’s president, Alberto Fernandez, had also said that he was seriously considering creating a digital state currency, the famous CBDC, in the near future.

However, as of March 2022, the IMF had reportedly made the government sign an agreement to discourage the use of crypto, in exchange for a nearly $45 billion debt restructuring plan.

The post “Buenos Aires +” will allow citizens to pay taxes in crypto appeared first on cryptodailynews24.com.