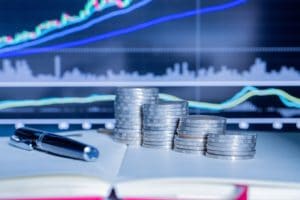 Fed to raise 50 basis points by May according to Powell

In a statement, Jerome Powell hints that a 50 basis point interest rate increase is a possible option for the Fed.

At the latest IMF (International Monetary Fund) panel, which the US central bank president attended, the world finance chief discussed, among other things, the strategies to be adopted to combat inflation, which is now over 8%.

The strategy of raising rates until the CPI reaches a low level (the Fed estimates 2%) has always been the best way forward, and this year the plan was to reach 3.50 points by the end of the year through seven rate increases.

In his speech to the IMF, Powell said that the possibility of a 50 basis point increase was on the table as early as the next FOMC and Fed meeting in May.

Nothing new on the front, but until now there has always been a clear objective, but the ways to achieve it have been a little vague.

This statement suggests that the days of 0.25 % bps increases, like those when inflation was at 3 or 4 %, would no longer be effective.

The strategy for containing inflation

“The Fed had the expectation that inflation would fall around this time and that expectation was disappointed so now we actually want to see progress, we intend to get to neutral rate levels faster”.

“Many committee members felt it appropriate that there be one or more increases of 50 basis points”.

The March inflation figure exposed a crucial point. Following the last rate hike, the figure did not fall and stood at a 40-year high of 8.3%.

Despite the fact that the US economy is very strong and solid, the employment figure is a bit worrying.

The President of the American Central Bank then spoke about strategy, adding:

“Our goal is to use our tools to bring supply and demand back into sync so that inflation falls and it does so without a slowdown that equates to a recession even if it was very challenging”.

Basically, the aim is to avoid shocks on either side, fighting inflation is necessary but without stifling the economy.

From this point of view, the suggested increases of 50 points or more give the right boost, even if some believe that inflation will cure itself when the geopolitical turmoil subsides.

This is in fact the opinion of Edward Moya, senior analyst at Onada, who explains:

“Inflation will take care of itself if geopolitical risks improve and expectations are maintained that the Fed will not aggressively tighten monetary policy and send the US economy into recession”.

The plans are clear and the next FOMC meeting is just around the corner, Powell has opened the Pandora’s box and it will be interesting to see how the markets react.

The post Fed to raise 50 basis points by May according to Powell appeared first on cryptodailynews24.com.