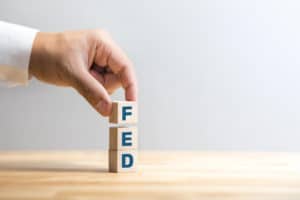 The Fed and the fight against inflation

The Fed, which had initially decided to apply a three-stage policy of raising interest rates by a quarter of a percentage point at a time to combat inflation, has had to revise its plans.

The prestigious investment bank Goldman Sachs had already predicted everything thanks to its analysts at an early stage, and so the Fed, represented by Secretary Powell, announced an increase of 0.25%, which will be followed by a further six rate increases of the same magnitude at the remaining meetings between now and the end of the year.

Jerome Powell (President of the US Central Bank) indicated four further increases for 2023 and a 2024 to be planned, but which does not envisage any action at present.

The year 2024 will not be subject to any inflation compensation measures in this sense, but if necessary the Fed will intervene abruptly.

The aim is to contain inflation from the current 8% to around 2%.

The opinion of James Bullard

On Monday, 18 April, during a virtual presentation hosted by the Council on Foreign Relations, James Bullard, the 12th president of the US Federal Reserve Bank of St. Louis, made some strong statements on the subject of interest rates and their management in the face of high inflation.

Bullard believes that the plan of the FOMC (Federal Open Market Committee) and the Fed to raise rates for this year and next year with a 3.5 percentage point increase for the current year is correct but there are discrepancies.

According to the President of the St. Louis Fed, the increases should be fewer but more incisive, at a minimum of 0.75% each, as happened in 1994 in a similar situation that led to years of great prosperity for the United States.

Jerome Powell, the current chairman of the US Federal Reserve, has so far planned seven rate increases for the current year, each of 0.50, in order to reach 3.50 in the autumn/end of the year.

In 2023 there will be additional, but more moderate, rate increases until they stabilize, whereas no changes are planned for 2024.

The consumer price index report for March is the worst in forty years, which is causing a lot of concern and is what led Bullard to make a stronger assessment in combating the problem.

According to Bitfinex, the crisis caused by the pandemic and the war that followed, as well as a dangerous rise in inflation, has benefited cryptocurrencies, which by their very nature represent an alternative financial system in which monetary policies cannot be implemented, nor can they be biased.

On the eve of the Fed’s first rate hike, inflation was at 7.9%, which was already a record high, and now it stands at 8.5% and shows no signs of slowing.

According to some rumours, the Fed itself is considering a more incisive and pragmatic strategy, as suggested by James Bullard, given the failure of the first step in combating inflation.

Bullard said in his speech that 50 basis points was not his base case and implied that Alan Greenspan‘s (former central bank president) decisions in the 1990s had helped fuel a significant rebound in the US economy. Greenspan comments:

“That was successful and created the US economy for a stellar second half of the 1990s, one of the best times in US macroeconomic history. In that cycle, there was a 75 point increase at one point. base, so I wouldn’t rule it out”.

The post The Fed and the fight against inflation appeared first on cryptodailynews24.com.