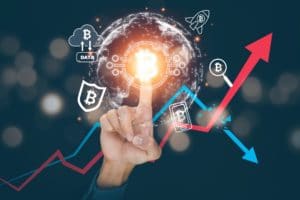 Bitcoin: correlation with big tech is at an all-time high

The correlation of Bitcoin’s price trend with that of big tech stocks has risen to an all-time high.

Bloomberg reveals this by showing a graph from which it can be seen that in recent days this correlation has risen well over 0.6 points (the maximum possible is 1).

The link between Bitcoin and Big Tech stocks

This level had never been exceeded before, except in early 2022, while in 2020 it had only risen just above 0.5 points.

Joanna Ossinger points out that this strong correlation started with the pandemic, in early 2020, and since then the price of Bitcoin has often tended to move in the same direction as the Nasdaq 100 index.

The 40-day correlation between these two trends reached an all-time high last Friday, when it rose to 0.6945 points.

This also explains why the price has been falling over the last few days despite the many good news stories coming out about it.

However, it must also be said that trading volumes on the crypto markets are low at the moment, so it is more likely that general financial market conditions will prevail. In recent months, the correlation had even fallen below 0.2 points when volumes soared.

In addition, according to some analysts, the growing narrative that institutional investors are now the main determinants of Bitcoin’s price is causing crypto market participants to mimic the behaviour of traditional market participants.

The Influence of Institutional Investors

The more dynamics due to the behavior of large investors or speculators prevail in crypto markets, the more they will inevitably resemble traditional ones, and since Bitcoin is a risk-on asset its trend will follow that of other risk-on tech assets.

Therefore at this point in time all the macro factors that affect Nasdaq-listed tech stocks in particular have a similar effect on Bitcoin’s price. This dynamic could continue until large volumes of BTC trading return driven mainly by retail investors.

It should be noted that the Nasdaq 100 Index (NDX) peaked around mid-November 2021, i.e. shortly after Bitcoin’s peak, and then fell until it hit two peak lows, one on 24 February and one on 14 March.

The Nasdaq 100 index then partially recovered in the second half of March, at the same time as the Bitcoin price rose, but as of 5 April it seems to be falling again.

In such a scenario, a strong renewed interest of retail investors and speculators in the price of Bitcoin seems unlikely, so it might continue to be quite correlated to the NDX performance.

The post Bitcoin: correlation with big tech is at an all-time high appeared first on cryptodailynews24.com.