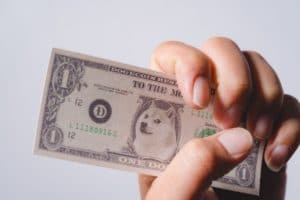 Elon Musk, CEO of Tesla and SpaceX, discussing the social network of which he is now the majority shareholder, Twitter, suggested Dogecoin (DOGE) as a method of payment for Twitter Blue’s subscription.

Today, however, Twitter CEO Parag Agrawal announced that Musk had declined to join the social network’s Board of Directors (BoD).

Over the weekend, a tweet was active in which Elon Musk discussed with users the possibility of adding an authentication tick, other than the ‘public figure’ or ‘official account’ tick, for all those who subscribe to the Twitter Blue service.

Twitter Blue is a monthly subscription service launched in June last year. It is currently available in the US, Canada, Australia and New Zealand and gives access to special features of the social network for $3 per month.

Musk, responding to a user who asked for the fee to be lower in Argentina, given that there an entire family eats for $3, agreed that “it should be proportionate to the availability of funds and in local currency“.

Not only that, just to address the fee issue, Musk suggested that one of the payment options could be his favourite memecoin: Dogecoin (DOGE).

Maybe even an option to pay in Doge?

E: “Yes, it should be proportionate to accessibility and in local currency

E: Maybe even an option to pay in Doge?”

Elon Musk refuses to join Twitter’s board of directors

A few hours ago, Twitter CEO Parag Agrawal shared with the community that Elon Musk has refused to join Twitter’s Board of Directors (BoD).

Elon has decided not to join our board. I sent a brief note to the company, sharing with you all here. pic.twitter.com/lfrXACavvk

“Elon has decided not to join our board. I have sent a short note to the company, sharing it with all of you here.”

Basically, after Agrawal himself had announced last week his enthusiasm for Musk joining Twitter’s board, it seems that on the morning of the announcement, Musk backed out.

On Saturday, Musk changed his mind and officially refused to join Twitter’s board.

You know, when the richest man in the world acts publicly, there could be consequences for the prices of the relevant assets.

And indeed, taking a look at Twitter’s (TWTR) shares, it seems that after the price pumped above $50 following the announcement of Musk’s entry as majority shareholder in the social, there has been a small dump.

At the time of writing and a few hours after Agrawal’s announcement of Musk’s refusal to join Twitter’s board, TWTR is worth $46. The price at the time of the close is yet to be verified.

At the same time, Musk’s favourite meme crypto, Dogecoin, has seen a strong price swing over the past 24 hours, topping $0.15.

The post Elon Musk suggests DOGE for Twitter Blue but turns down board seat appeared first on cryptodailynews24.com.