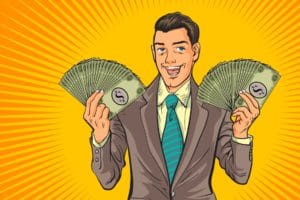 Billionaires increasing in the crypto world

Strong developments in blockchain resulting in a steady and strong growth of the crypto sector and a huge NFT boom in 2021 have created new crypto-billionaires.

The new ranking of crypto-billionaires

A year full of change is behind us. There has been the great rise of NFTs but also strong fluctuations in BTC and other tokens, but this hasn’t stopped the biggest players in the cryptocurrency world from achieving amazing results.

The CEO of Binance, Changpeng “CZ” Zhao, remains at the top of the list. He is followed by Sam Bankman-Fried of FTX and Brian Armstrong of Coinbase.

Newcomers to the list include the founders of the company – Alchemy, the founders of OpenSea etc. Going in order, below you will find a precise and detailed ranking of the most important billionaires from the cryptocurrency world.

The founder and CEO of Binance “CZ” is once again the richest person in the cryptocurrency world this year and with a net worth of $65 billion he is also the 19th richest person on the planet.

It seems that Changpeng Zhao owns at least 70% of Binance, the most important platform used for cryptocurrency trading.

In fact, last year the company seems to have facilitated as much as two-thirds of all trading volume, with a return of $16 billion.

Second on the list is Sam Bankman-Fried, the 30-year-old who moved from Hong Kong to the Bahamas at the end of 2021, along with his exchange FTX.

FTX raised $400 million in January with a valuation of $32 billion.

The CEO and founder of Coinbase brought the cryptocurrency exchange to the public through a direct listing in April 2021 with an extraordinary $100 billion valuation.

Its market capitalization is about half of what it is today but is already good enough to make Armstrong, with his 19% stake, the third richest person in the cryptocurrency industry.

The fourth runner-up is the co-founder and Chief Technology Officer of FTX – Gary Wang.

The 32-year-old launched FTX along with Bankman-Fried in 2019.

The guy holds a 16% stake in FTX’s global business and over $600 million in FTT, the platform’s native token.

Before entering the cryptocurrency industry, Wang was a software engineer at Google, where he helped create the online booking platform Google Flights.

In fifth place is the co-founder and executive chairman of the blockchain company – Ripple, whose XRP token is currently the eighth-largest cryptocurrency.

The two literally turned their $65 million deal with Zuck into digital gold, amassing about $4 billion each.

In fact, the brothers started buying Bitcoin back in 2012 and have since continued to diversify their digital assets, acquiring other cryptocurrencies and launching the crypto exchange Gemini, but that’s not the end of the story as the two also own the NFT marketplace – Nifty Gateway.

He is expected to own about a quarter of Upbit’s parent company – Dunamu, which was valued at $17 billion last November.

Barry Silbert is the founder of the investment group – Digital Currency Group.

His investment company controls Grayscale, which manages about $28 billion in crypto assets, as well as CoinDesk, a well-known information company in the crypto world.

Eventually, through numerous subsidiaries, Silbert’s DCG has invested in more than 200 crypto startups.

In tenth place, we find McCaleb who made most of his fortune from Ripple Labs and XRP, of which he is a co-founder.

McCaleb is also the founder and Chief Technology Officer of the cryptocurrency Stellar.

Nikil Viswanathan and Joseph Lau are the co-founders of Blockchain Decacorn Alchemy.

The two first met in 2011 at Stanford while serving as TAs in a computer science class, and have since built over 10 products together.

Their first big success was the meetup app – Down To Lunch which was, briefly, also the best social networking app in Apple’s App Store in April 2016.

After discovering blockchain, the duo started Alchemy in 2017 as a toolkit for entrepreneurs and blockchain developers.

To date, Alchemy is one of the most prominent Web3 app development platforms.

In February, the company raised $200 million, receiving a $10.2 billion valuation.

The two co-founded OpenSea, one of the first NFT marketplaces.

OpenSea serves as a peer-to-peer platform for users to create, buy and sell NFTs.

OpenSea was valued at $13.3 billion, up from $1.5 billion just six months earlier. Finzer and Atallah each hold an estimated 18.5% stake in the company.

In January, Paradigm invested in Citadel Securities, one of the largest market makers in the US equity markets. The 34-year-old Ehrsam left Coinbase in 2017 but remained on the board and still holds a 6% stake in the company.

Before discovering cryptocurrencies, Ehrsam worked as a trader at Goldman Sachs. The young tycoon partly attributes his crypto success to being a “hardcore gamer” in high school.

Saylor turned MicroStrategy, the enterprise software company he co-founded in 1989, into a Bitcoin proxy.

In 2020 alone, Michael oversaw MicroStrategy’s purchase of over 70,000 BTC, at a cost of approximately $1.1 billion, using cash reserves and borrowed funds.

The gamble obviously paid off as Bitcoin’s value soared. As a result, MicroStrategy’s shares have quadrupled in the last two years, putting Saylor back in the three-bit club.

Roszak bought his first Bitcoin in 2012 and has also participated in numerous ICOs such as Mastercoin, Factom and Maidsafe.

Roszak has also invested in numerous crypto start-ups, such as the very popular Coinbase and Kraken exchanges.

Tim Draper is a venture capitalist who, like Roszak, invested in Bitcoin way back in 2012, the price of which as you may recall was a long way from the current high of $60,000 reached months ago.

The post Billionaires increasing in the crypto world appeared first on cryptodailynews24.com.