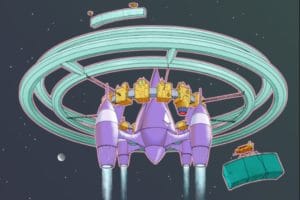 Mark Cuban: “the Merge will drive up Ethereum’s price”

According to billionaire Cuban, the next update will make Ethereum soar

Mark Cuban and statements on the price of Ethereum

According to billionaire Mark Cuban, the price of Ethereum could soon go up thanks to the Merge upgrade.

There is indeed great anticipation throughout the cryptocurrency world for the upcoming launch of Ethereum’s new update, Merge, which should finally solve most of its power consumption issues, making the blockchain more sustainable, scalable and cheap.

Quite simply, this Merge upgrade will see Ethereum’s main blockchain merge with the Beacon Chain and the network officially move from being a Proof-of-Work (PoW) blockchain to a Proof-of-Stake (PoS) blockchain.

After this long-awaited merger, which has been talked about for months, Ethereum mining would become obsolete, and thus the impact on the environment from the energy consumption used to carry out mining would be reduced by almost 99%.

According to experts, the supply of new Ether is also likely to decrease, as fewer coins are expected to be issued.

Why be optimistic about ETH

But even billionaire Mark Cuban, in a recent interview with Fortune, expressed very optimistic views on Ethereum and the impact Merge may have on Ethereum’s price.

Speaking to the financial newspaper, the well-known billionaire and long-time cryptocurrency investor described himself as “very bullish” on Ethereum for two main reasons.

The first reason for Cuban to be bullish on ETH would be the fact that the change in model from PoW to PoS should significantly reduce its impact on the environment.

The second reason would be the change in Ethereum’s issuance after the merger. Cuban said he was particularly interested in how the smaller amount of ETH issued could make the asset deflationary.

The company specializing in blockchain analytics, IntoTheBlock, has written in its newsletter:

“Following the merge, the amount of ETH issued is projected to drop by 90%, which would lead similar levels of fees to reduce Ether’s supply by as much as 5% a year”.

In the interview, Cuban called himself an Ethereum maximalist because his passion for blockchain is mainly due to Ethereum’s smart contracts.

“What really changed everything was smart contracts,” he said in March 2021. “Smart contracts came along, and that created DeFi [or decentralized finance] and NFTs [or non-fungible tokens]. That’s what changed the game. That’s what got me excited. That’s why it’s a lot like the internet”.

The post Mark Cuban: “the Merge will drive up Ethereum’s price” appeared first on cryptodailynews24.com.