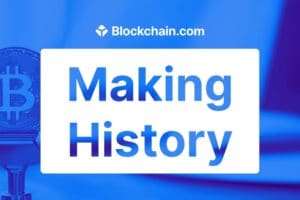 Blockchain.com announced it will install the largest piece of crypto art in its new Miami office: the Bitcoin whitepaper in a 100-foot-tall sculpture.

Blockchain.com and Bitcoin’s whitepaper as the largest work of crypto art

It was 1 April when Blockchain.com announced that it had commissioned the installation of a 100-foot-tall sculpture of Bitcoin’s whitepaper to adorn the walls of the lobby of the Blockchain.com Building in Wynwood, Miami.

But for many, this news seemed like a classic April Fools’ joke. Well Peter Smith, CEO and co-founder of Blockchain.com, wanted to dispel the myth, assuring the crypto community that the work that will pay tribute to the pseudonymous creator of Bitcoin, Satoshi Nakamoto, will soon be real.

So about our April Fools announcement… we were actually serious, @decryptmedia – we’re building the world’s largest tribute to the #Bitcoin white paper in the @blockchain Miami HQ.

“So about our April Fools announcement… we were actually serious, @decryptmedia – we’re building the world’s largest tribute to the #Bitcoin white paper in the @blockchain Miami HQ. It’ll be 100 feet of Satoshi’s words and Bitcoin code.”

The artwork, titled “Rainfall of Code”, features quotes from Satoshi Nakamoto and selections from Bitcoin’s code.

Bitcoin whitepaper as “the bible” of cryptography

This tribute to Bitcoin’s whitepaper has a very specific value for all those who follow the crypto industry: the beginning of a movement, and the code that brought its vision to life.

In this regard, Smith quoted the following words:

“The Bitcoin whitepaper is sacred within crypto,” said Peter Smith, Blockchain.com CEO and Co-Founder. “We all felt a responsibility — no, a duty — to enshrine Satoshi’s immortal words at our global HQ. There hasn’t been anything this big in the crypto art world since Cryptopunks sold for millions at Sotheby’s.”

The lobby of Blockchain.com’s new Miami office will be designed to accommodate the hundreds of thousands of expected visitors who will make their pilgrimage to stand in the presence of the monument.

From 6-9 April 2022, one of the world’s largest cryptocurrency and blockchain conventions will be taking place in Miami, in the striking setting of the new state-of-the-art exhibition space.

Attending the event are eagerly awaited speakers such as the President of El Salvador, Nayib Bukele, who will of course speak about the decision taken on 7 September 2021 to make Bitcoin the country’s legal tender and how it is all progressing.

Anthony Pompliano will also be there, who will hold a heated opening debate with Mike Novogratz, CEO of Galaxy Investment Partners. And then, Leo Zhang, founders of Annica Research who like Ethan Vera and Brian Wright, will talk about mining.

The post Blockchain.com: Bitcoin’s whitepaper in a 100-foot-tall sculpture appeared first on cryptodailynews24.com.