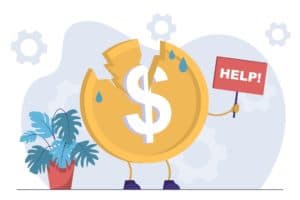 USDN: the failure of the algorithmic stablecoin

Neutrino USD (USDN) is an algorithmic stablecoin issued by the Neutrino protocol whose value is tied 1:1 to that of the US dollar. Or at least it should be.

As can be seen from its price evolution, USDN has started to lose its peg in recent days, hitting a low of $0.68 just yesterday, 4 April.

The cause of the loss of the USDN stablecoin’s peg

Neutrino is a project developed on the Waves blockchain and therefore USDN is issued against a collateral deposit in WAVES, a coin native to the blockchain of the same name.

The operation is very similar to that of the Maker platform, where DAI, an on-chain collateralized stablecoin, is backed by collateral deposits via ETH or other supported crypto as collateral.

If the value of the collateral falls below a certain threshold, the stablecoin loan issued by the protocol is no longer sustainable. This is why Maker has decided to diversify the offering of supported collateral.

The goal is not to make the ecosystem dependent on a single asset, because in the event that this asset depreciates dramatically, the entire protocol and the loans generated by it would be compromised.

In part, this was the cause of the loss of the Neutrino USD peg. The blame, however, lies with poor and above all ill-intentioned management on the part of the Waves team.

A DeFi analyst, who goes by the pseudonym 0xHamZ on Twitter, has recognized a recurring pattern in blockchain movements. The pattern used to manipulate the price of WAVES is easily guessed from his tweet posted a few days ago.

This is trackable onchain

Stating at the end with a certain ‘defiant’ tone:

“This is trackable onchain”

The user in fact managed to detect this pattern thanks to the track of on-chain transactions.

In simple terms, the team deposited a certain amount of USDN on Vires Finance, a DeFi platform on the Waves protocol, to borrow USDC. These were then moved to Binance and used to buy WAVES. Finally, the WAVES obtained were collateralized to issue more USDN. And so the process began again.

The same user has also created a thread that clearly reconstructs all the movements made on the various blockchains attaching where possible the link of the transaction viewable on-chain.

Negative implications for the Waves ecosystem

Compounding this is the fact that most of the TVL in the Waves ecosystem is tied to the use of USDN.

In fact, since the loss of the stablecoin’s peg, recorded TVL within the Waves DeFi ecosystem has dropped by $1.3 billion, over 27%.

As if that wasn’t enough, Sasha Ivanov, founder and Lead Developer of Waves, in a Twitter thread accuses Alameda Research, a crypto trading firm, of manipulating the price of WAVES to profit from a short position they opened.

The post USDN: the failure of the algorithmic stablecoin appeared first on cryptodailynews24.com.