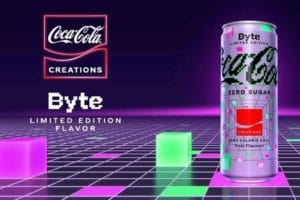 The global drinks giant has announced the launch of its new pixel-flavoured Coca-Cola Zero Sugar Byte through its Creations limited rollouts platform. To promote the offering, Coca-Cola will use a Pixel Point Island in Fortnite.

Coca-Cola continues to creep into the gaming world as well, through a new launch: the Coca-Cola Zero Sugar Byte which evokes the taste of pixels.

What do you think 𝕡𝕚𝕩𝕖𝕝𝕤 taste like? Reply with your most creative guesses. pic.twitter.com/MJDZE4VHNm

“What do you think 𝕡𝕚𝕩𝕖𝕝𝕤 taste like? Reply with your most creative guesses”.

This is the second drink the global giant is launching through its experimental Creations platform.

To promote the offering, Coca-Cola has partnered with gaming organization PWR on a Pixel Point Island in Fortnite where visitors can hunt for hidden treasures, play mini-games and participate in other activities. The access code for the virtual space, which is open for a limited time through the Fortnite Creative portal, is 8565-0287-3178.

The Coca-Cola Zero Sugar Byte will be available to US consumers from 2 May.

Media strategies based on virtual experiences

The new Coca-Cola Zero Sugar Byte comes on the heels of the success of the Starlight drink, the first drink produced on Creations that evoked the “taste of space”, recalling space travel by companies such as SpaceX and Blue Origin.

In that case, Starlight featured an augmented reality (AR) performance by pop singer Ava Max that could be accessed by scanning a QR code on the packaging.

In contrast, Zero Sugar Byte is pixel-themed and has unique packaging, with lettering reminiscent of the blocky graphic style of vintage video games, while there will be a scannable label that links to an AR game.

With Creations, Coca-Cola intends to experiment with new strategies that avoid months-long media campaigns, while engaging in limited rollouts that emphasize tailored digital and real-world experiences.

Gaming partnerships and Heineken’s entry into the metaverse

Most recently, Coca-Cola became a founding partner of League of Legends: Wild Rift and Wild Rift Esports through a collaboration with Riot Games.

It’s a new way for the global beverage giant to connect with gamers by introducing its brand to these two fast-growing mobile gaming franchises.

At the same time, Heineken also launched its beer in the Decentraland metaverse: Silver Beer, with no calories, no hidden ingredients and … no beer.

Unlike Coca-Cola, Heineken simply created the claim for one of the commercials presenting the product, which marks the brand’s entry into the metaverse.