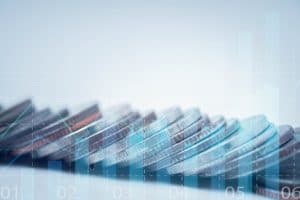 Wall Street: futures are on the rise

The quarter that just ended saw the worst performance for Wall Street futures in three years. The 34,000-point drop in the Dow Jones and the performance of the S&P 500 and its peers are emblematic.

It has not been this bad since the first quarter of 2020, since the outbreak of the pandemic. History is repeating itself, and while the problem used to be health, now the risk of a third world war following the events in Ukraine is worrying the markets.

The situation is also worrying from the point of view of equities, but nothing is lost, futures are on the up and this suggests a turnaround that will allow us to breathe even though concerns obviously remain.

The relationship between two-year and ten-year rates and those between five and thirty years have reversed but the situation is under observation and volatile. On top of this there is the employment rate which continues to rise despite inflation and geopolitical problems.

Last week Moscow decided that supplies of gas and oil, but also of all raw materials, would gradually be allowed only in roubles.

The currency, which since 24 February had lost 50% of its value in just a few days, has recovered the gap after a little over a month and is set to perform even better.

The Kremlin’s move was a tsunami and the markets reacted in an unhinged manner, even Western political leaders followed suit and did not expect this reaction.

At first, concern prevailed, but then, following talks with Putin, European leaders got the impression that it would be gradual from 1 April and that states would be able to organize themselves.

Moscow has specified that importing countries will have to open a currency account with Gazprombank and transactions will be handled through that account, the fear is that following a failure to pay Russia will immediately close the “taps” creating panic.

The danger should be averted for now, but the situation continues to be monitored, and in the meantime, Western countries are making contacts with Algeria, the USA and other markets to differentiate supplies and compensate in the medium term for the impasse caused by Russia’s imperialist delirium.

This has obviously had repercussions on the price of Brent.

Brent is suffering greatly from the crisis in Ukraine and from $30 a few years ago we are back at $100 a barrel, prices we have not seen for a long time.

Concerns are real, with Russia increasingly playing the role of a loose cannon and a crucial energy partner for Europe.

North African reserves have come to Europe’s rescue, but it is the United States of America that is making its voice heard.

President Biden has passed an act decreeing that the US will draw on its oil reserves to compensate for rising fuel prices and energy costs in general.

The measure will last for at least six months and will involve the use of a million barrels a day in order to keep the price down and not further aggravate companies and the population, which have already been hit so hard by the pandemic and double-digit inflation.

The operation is expected to reach a total of 180 million barrels, an unprecedented measure that only a country like America can afford to undertake today.

The post Wall Street: futures are on the rise appeared first on cryptodailynews24.com.