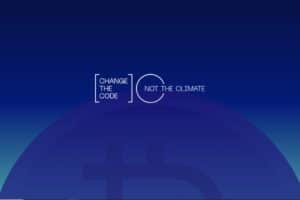 Greenpeace is talking about Bitcoin and announcing a new campaign “Change the code, not the climate”, aimed at reducing the energy use of BTC mining to be less harmful to the environment.

Greenpeace, an independent global network involving 26 national/regional organisations in over 55 countries, tweeted about Bitcoin to launch its “Change the code, not the climate” campaign:

Now, we're joining with @ewg to reduce Bitcoin’s energy use by 99.9%.#ChangeTheCode: https://t.co/zLUDzvKzsMhttps://t.co/aUdDduI1CA

This would involve a change in software, or rather “protocol”, that would mean the queen of crypto would no longer have to be “mined” using as much energy as it does now.

In the video, Greenpeace compares the amount of energy needed to mine Bitcoin to the total energy use in a country like Sweden.

The campaign to make BTC more environmentally friendly was launched by Greenpeace, along with other climate activists and the co-founder of the Ripple money transfer system, Chris Larsen.

“Change the code, not the climate” and interview with Rolf Skar

According to an interview with Greenpeace’s Campaign Director Rolf Skar, the new campaign “Change the code, not the climate” would like to bring Bitcoin’s Proof-of-Work (PoW) to become a Proof-of-Stake (PoS), just like Ethereum is trying to do. In this way, the huge energy use or the use of that polluting fuel, would be reduced by 99%.

Greenpeace has also joined the Environmental Working Group and anyone who wants to join the campaign or wants to know more can do so by going to the official website.

Skar also clarified that “banning Bitcoin mining”, as China did in 2021, would not make sense. In fact, just as it happened, miners moved elsewhere. This indicates that “banning” is not the solution.

Only two million BTC away from max supply

Greenpeace’s appeal to miners, comes just when there are only two million Bitcoins left to mine. In fact, as of today, 19,002,284 BTC have already been created.

As is well known, the BTC cap is 21 million and, at the moment, 6.25 BTC are mined for each block mined and added to the Blockchain, for a total of about 900 BTC per day.

Obviously, with the next halving scheduled for April 2024, the current rate will be halved to 3.125 BTC per mined block. The halving usually also affects the price of Bitcoin which, at the time of writing, is $46,162.