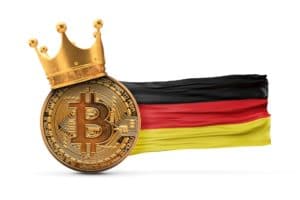 In Germany, 16% hold crypto and another 13% say they are interested in investing in cryptocurrencies in the next six months.

KuCoin recently published its new report “Into The Cryptoverse 2022“ dedicated to Germany.

This is the German edition of Into The Cryptoverse 2022, which explores cryptocurrency adoption rates and local involvement in the decentralized industry in Germany.

The report indicates that the clear rules applied to the crypto industry since 2013 have had a positive effect on mass adoption in Germany. Indeed, it was the first European country to recognize Bitcoin as a “units of value” that can be used as a “financial instrument”.

KuCoin’s report on the use of cryptocurrencies in Germany

One of the most significant figures to emerge is that as many as 16% of the German population aged between 18 and 60 have invested, traded or owned cryptocurrencies in the last six months.

It is worth remembering that the 2021 bull run actually began sixteen months ago and ended in November, so this figure only refers to the tail end of it, at least half of which was without an ongoing bull run.

In addition, 41% of investors said they plan to buy more cryptocurrencies in the next six months.

13% of respondents said they had not yet invested, but were curious and intended to do so in the next six months. Of these, however, most are still somewhat hesitant, with only 23% saying that it is very likely that they will do so.

Of those who have invested, only 17% say they have at least two years of experience in crypto, and only 4% more than six years. In contrast, 45% said they had entered in the last six months, and 18% in the last twelve.

The effect of the bull run on investors

These figures clearly show that the boom has only been taking place recently, i.e. following the start of the last major bull run, with many people entering after the bull run had ended.

Among the reasons why so many Germans have turned to crypto is the growing appeal of cryptocurrencies as a passive income tool, so much so that crypto staking and lending have become mainstream. In fact, 35% of respondents said this was their reason for investing.

It turns out that on average, German investors are staking 24% of their total cryptocurrency holdings, thanks to higher average returns than bank savings. On average, they spend 13% on lending.

Other reasons include wanting to be part of the “future of finance” (44%), using cryptocurrencies as a reliable means of storing value (30%), or hoping to become financially independent (29%).

It is also worth noting that the percentage of male investors has dropped to 69%, whereas among the crypto-curious who have not yet invested, 53% are women.

Another interesting fact is that there seems to be a high level of cryptocurrency literacy in Germany, as evidenced by the fact that 77% of cryptocurrencies that have not yet invested are actively looking for potential assets to invest in. In this last characteristic, Germany is probably an exception to most other countries.