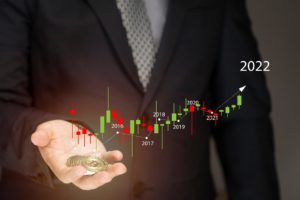 Which cryptocurrencies will explode in 2022?

It is absolutely impossible to know for sure which cryptocurrencies will explode in 2022.

Predictions about future cryptocurrency prices are always uncertain and 2022 might actually be a bearish year.

However, it is worth mentioning that, unlike past cycles, there are several analysts who believe that 2022 could instead be a positive year.

Bitcoin has a cycle of around 4 years due to the halving. Until now, it has always been reflected in the price as well, and since changes in the price of BTC affect the entire crypto market, other cryptocurrencies tend to have a 4-year cycle as well.

The latest cycle started in May 2020 with the third halving, and will end in the spring of 2024. The peak of this cycle was reached on 10 November, when the price of Bitcoin touched $70,000 and the overall market capitalization of the crypto market slightly exceeded $3 trillion.

According to several analysts, November 2021 may not be the peak of this cycle.

In past cycles, with the exception of the first one, the peak always occurred between November and December of the year following the halving, i.e. exactly as in 2021, but it occurred thanks to an impressive speculative bubble that did not exist at the end of 2021.

So while the year after the peak has been decidedly bearish in the past, 2022 may not be, according to some.

If it were bearish, like 2014 or 2018, probably no cryptocurrency could skyrocket in the course of the year, unless some very rare countertrend occurs.

However, not only do some believe that the $69,000 mark of November 2021 could be surpassed by Bitcoin in 2022, but that even Ethereum could make new highs.

Bitcoin could exceed its ATH in 2022

Cryptocurrencies that will explode in 2022

Most likely, there will be far fewer cryptocurrency “explosions” in 2022 than in 2021, so it’s extremely difficult to pinpoint which tokens might skyrocket.

It must be noted, however, that some prices at the moment seem particularly low when compared to those at the beginning of the year.

For example, Solana (SOL) has a current price that is 42% lower than it was at the end of December, suggesting that it may be undervalued. Polygon (MATIC) is also down by 35% while Uniswap (UNI) by 36%. Algorand (ALGO) by as much as 47%.

A very special case is The Sandbox (SAND), down 40% since the beginning of the year despite the fact that the metaverse is gaining momentum.

As the boom in NFTs and DeFi seems to have died down, the fact that the metaverse hasn’t even really started yet suggests that there could be room for strong growth.

If, on the other hand, 2022 turns out not to be a particularly bullish year, we may have to wait until 2024 to see real booms again, except for the usual absolutely unpredictable cases of minor coins with volumes so low as to be easily manipulated.

At the moment, the only real “big thing” known about 2022 could be the Ethereum Merge with the move to PoS, but this is something that is already widely known and it is possible that the markets have already partly priced it in.

The post Which cryptocurrencies will explode in 2022? appeared first on cryptodailynews24.com.