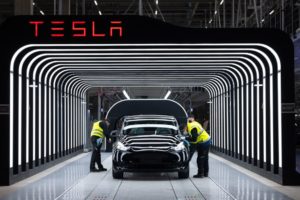 “Tesla made in Europe” is now a reality, following the opening of the electric car company’s first European plant, near Berlin, Germany, by CEO Elon Musk. The new plant will produce half a million SUVs a year.

The new $7 billion factory is located just outside Berlin, Germany, and was built in just over two years.

Speaking of which, here is Musk’s enthusiasm expressed on the social network of crypto-lovers, Twitter:

Excited to hand over the first production cars made by Giga Berlin-Brandenburg tomorrow!

“Excited to hand over the first production cars made by Giga Berlin-Brandenburg tomorrow!”

The GigaFactory in Berlin

To celebrate the new facility called Gigafactory Berlin-Brandenburg, the first 30 Teslas made in Europe were delivered to customers who had ordered them, who were present at the event.

Not only that, Tesla has already announced that it will build its Model Y sport utility vehicle at the European plant.

The Gigafactory Berlin-Brandenburg is Tesla’s third major plant, following the factories in Fremont, California, and Shanghai. Another plant, outside Austin, Texas, is expected to open soon. At the moment, 3,000 people already work at the Gigafactory Berlin-Brandenburg, but once it is fully operational, it is estimated that the German plant will employ 12,000 people.

Of course, Germany is famous for the presence of other major car manufacturers and in fact, the Gigafactory Berlin-Brandenburg is located 130 miles east of Volkswagen’s headquarters in Wolfsburg.

In this regard, Stefan Bratzel, director of the Center of Automotive Management in Bergisch Gladbach said:

“While Tesla was a “thorn in the flesh of German automakers, its presence in the country could ultimately help lift the entire sector. On the one hand, this is the strongest competitor sitting right on the doorstep, but it can also have a motivating and stimulating effect”.

Recently, the world’s richest man in the midst of European expansion used his irony to reveal the identity of Satoshi Nakamoto, the creator of Bitcoin.

In a tweet, Musk posted an image associating four major brands in the tech world: Samsung, Toshiba, Nakamichi and Motorola. Using the syllables of each of these brands, Musk extolled the name of Satoshi Nakamoto.

Obviously, as is often the case, the net went wild trying to “play along” with Musk and see what the meaning was.