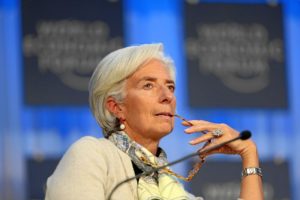 The President of the ECB Christine Lagarde is once again ranting against cryptocurrencies, claiming that they are used by Russia to circumvent sanctions.

At an online event, the President of the ECB spoke about the use of cryptocurrencies. As Bloomberg reports, she stated:

“When you see the volumes of rubles into stable, into cryptos, at the moment it is the highest level that we have seen since maybe 2021″.

Speaking of cryptocurrencies, she added that they are:

“certainly being used, as we speak, as a way to try to circumvent the sanctions that have been decided by many countries around the world against Russia”.

Fabio Panetta, a member of the ECB’s board, also added to the mix:

“The risk of misuse of crypto-assets to circumvent the sanctions against Russia is an important reminder that these markets must be required to comply with the strictest standards — including as regards know your customer, anti-money laundering and disclosure requirements”,

The European Union, through the European Commission, has specified that the sanctions that are implicating Russian oligarchs also cover cryptocurrencies.

But how to prevent the use of crypto? Cryptocurrencies by their very nature cannot be seized, unless they are on a centralized exchange. In this case, the exchange should be ordered to block the accounts of the sanctioned oligarchs.

However, there is a lack of guidelines that would involve crypto exchanges. Despite appeals from Ukrainian Minister Fedorov, crypto exchanges have not blocked Russian accounts, because, as Kraken’s CEO explained, without an order from governments, they cannot act on their own initiative. Only Coinbase took action by blocking 2,500 accounts of Russian users linked to suspicious activity.

Russians could use BTC to circumvent sanctions

While it is true that there is no law to prevent Russians from using crypto to evade sanctions, Democratic Senator Elizabeth Warren has taken a step forward in the United States.

Her bill does not actually require exchanges to block accounts that can exploit crypto to evade sanctions. Instead, it punishes exchanges that operate with them.

Moreover, the bill contains a number of impositions that would also affect US citizens. The issue of sanctions on Russia in this case seems more of an excuse to target the industry in general, which Senator Warren has never liked.

How to enforce sanctions

Given that only centralized exchanges have the power to prevent crypto from being used by sanctioned oligarchs, the solution proposed by the ECB was to prevent exchanges from making transactions in roubles.

According to the Financial Times, however, the EU has not considered this proposal at the moment. This is ensuring that the large exchanges, while also respecting the nature of cryptocurrencies (a dream of financial freedom) continue to operate in Russia or with Russian users.