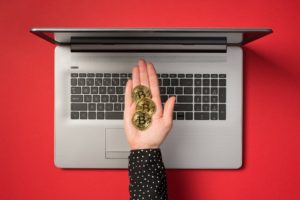 There are several predictions regarding the price that Bitcoin might come to have during 2022.

Indeed, in the short term, uncertainty seems to reign, in the sense that it does not seem to be possible to find a common line, or trend, between the various forecasts in circulation.

There is not even agreement yet that the bear market has begun, as for some the current one is just a passing phase.

End of the bull run

The only thing that is certain is that the 2021 bull run is over. It stopped around mid-November and then began an almost steady descent until the end of January.

On the contrary, the current price is in line with that of 20 January, i.e. before the momentary collapse to $33,000 and subsequent rebound.

In other words, since 20 January the price of Bitcoin seems to have entered a lateralization phase, neither bearish nor bullish, from which it is struggling to get out.

In light of this, there are several analysts who argue that the trend could turn downwards when this phase stops, and others who argue instead that it could turn upwards.

Bitcoin could turn bullish in the medium term

If, on the other hand, attention is shifted to the medium term, optimistic forecasts seem to prevail. In fact, even among those who support the hypothesis of a downward break-up of the current lateralization phase, there are those who believe that an eventual fall could then be followed by a rise.

Generally speaking, there are many optimistic predictions that the price of Bitcoin could return above $50,000 or even $60,000 in the coming months in the absence of any significant external phenomena.

For instance, Finder.com’s panel of 33 fintech specialists on average believes that by the end of the year it could set new all-time highs of over $70,000.

That prediction dates back to late January, when the price was significantly lower than it is now, and in recent weeks the bears have been shrinking, with a slight increase in bulls and a significant rise in neutral positions.

This confirms a prevalence of bullish positions in the medium term, while uncertainty still reigns in the short term.

However, the fact that some large institutional investors from the world of traditional finance have made their first significant entry into the crypto market in recent days further supports this scenario. They waited almost two months to enter after the crash at the end of January, but have now entered, although probably only with small positions.

On top of that, the supply of BTC on exchanges is currently at the lows of this fourth halving cycle, so bullish assumptions over the medium term are also supported by hard data from the markets.

However, it is important not to forget that the bears are still there, and have simply shrunk since the February rebound.

The post Bitcoin predictions for 2022: uncertainty and bullish signals appeared first on cryptodailynews24.com.