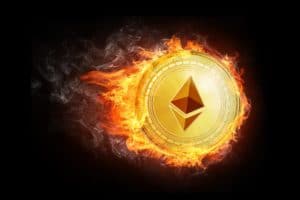 This means that the total number of ETH in circulation since August has only increased from 117 million to 118.5 million, an annualized rate of just under 2%.

In other words, London has more than halved the inflation of the ETH money supply, bringing it to levels comparable to Bitcoin’s (+1.6% over the past 12 months).

In the future, it is possible that ETH money supply inflation could even fall well below 2%, while Bitcoin’s will halve from spring 2024 with the fourth halving.

With London 2 million ETH were burned

Ethereum Fee on the rise

The other side of the coin is the increase in fees on transactions recorded on the blockchain.

On Ethereum, the median has risen from around $2 prior to London to a current high of $4, while on Bitcoin, for example, it has often remained between $0.3 and $0.4 over the same period.

However, it has to be said that more and more transactions of low and medium amounts are not recorded on the blockchain but are carried out with second layers, which greatly reduce the costs.

The reason why the fees on the Bitcoin blockchain are so low is precisely because of the increasing use of the Lightning Network, and the drop in fees on Ethereum from $30 in October 2021 to the current $4 is probably also due to the increased use of second layers such as Polygon or Optimism.

The transition to PoS

Furthermore, the fees are expected to decrease further with Ethereum’s move to Proof-of-Stake.

In the light of this, it is possible to imagine that the problem of excessively high fees could sooner or later be resolved, thanks to the joint impact of the transition to PoS and the increasing use of second layers.

The Merge that will effectively move Ethereum transactions to the new PoS-based Beacon Chain could take place by the end of the third quarter of this year, if not even before the end of the second quarter.

This means that we could see the final solution to the high fees problem as early as 2022.

Furthermore, the Merge will effectively eliminate ETH mining, making it possible to further reduce the creation of new ETH, if desired. This could also allow for a further reduction in the inflation of the ETH money supply.