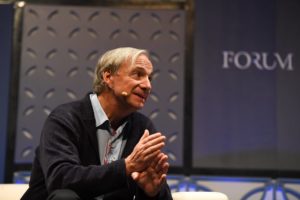 This was revealed by CoinDesk citing anonymous sources that the world’s largest hedge fund is planning to buy into crypto derivatives, and not cryptocurrencies directly.

The news broke last night when the price of Bitcoin was just over $41,000.

The crypto markets did not react to the news, but overnight the price jumped above $43,000 in just under two and a half hours.

Bridgewater Associates currently manages more than $150 billion in assets, so this indiscretion could be a strong signal for a possible recovery in the crypto markets. Founder Ray Dalio, on the other hand, has been investing in Bitcoin since May 2021.

Still, this would be a tiny investment compared to its total AUM, but other major investors are reportedly in talks to invest in this derivative.

Last month, the company denied that it was interested in taking a position on cryptocurrencies any time soon, so a real breakthrough may be in the works.

While it is not possible to draw any conclusions from the rumours, it is possible to imagine that a BTC price that has not risen above $45,000 for two and a half months now is considered attractive. If this is the case, Bridgewater Associates probably expects growth soon.

It is not even known what derivative product they would have chosen, nor what the underlying is. In other words, it is not known whether they want to take a position on the price of Bitcoin, Ethereum, or other cryptocurrencies.

The timing is also unknown, although rumours have been circulating for some time that the fund would be entering before the end of the second quarter.

If this is the case, then if they have decided to enter now, it could mean that they expect prices to rise soon, which could lead them to choose to enter before they rise. However, these remain only speculations based on rumours.

However, another anonymous source reports that the hedge fund is doing serious due diligence, including finding suitable providers, which would suggest that they are serious about entering.

The downward phase that began in mid-November seems long over, and the current phase of lateralization may not take long to end.

In particular, since the second week of March, a certain appetite for risk seems to have returned to the financial markets, which could herald an increase in optimism and a new bull run. However, it remains to be seen whether these impressions will really herald a bull run, or whether new problems will instead bring fear back to the financial markets.

The post Ray Dalio’s fund invests in cryptocurrencies (and the price of BTC goes up) appeared first on cryptodailynews24.com.