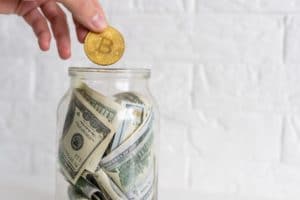 In some states, it is possible to accumulate the amount of severance pay in Bitcoin.

This is possible in particular for those who use specific private services for the custody of the severance pay, while for those who choose to leave it in the company it is much more complicated, if not impossible.

How to invest severance package in Bitcoin in the US

For example, in the US, where there are several specific financial services for the so-called severance package (or exit package), there are some that allow users to accumulate BTC and not just dollars.

The severance package is in fact nothing more than a small portion of the salary that is not paid to the employee every month but set aside. In general, it should be set aside by the employer, who is then obliged to pay the employee the entire amount set aside when he/she leaves the workplace.

Investing severance pay in Bitcoin can be risky

Earning from the severance package

However, there are a number of services provided by specialized financial companies that not only take care of setting aside and safeguarding these severance pay funds, but also, in many cases, of making them yield a profit.

In fact, those who keep the same job for many years, or even decades, may benefit a lot from making these funds work, instead of just setting them aside.

Of course, investing them to try to make them work always involves a higher risk, so there are many people who choose instead to simply set them aside in order to reduce the risk to a minimum.

But when inflation remains high for a long period of time, the loss of purchasing power of those set-aside funds starts to become significant, so the risk of incurring significant losses by simply setting them aside increases.

For a few years now, some companies involved in making severance pay funds profitable have also been offering the alternative of investing all or part of them in Bitcoin.

This is a kind of DCA, i.e. an accumulation plan that is financed with the funds that are set aside each month for the severance pay.

There is no data on the success of this curious form of accumulation, but when inflation is low, as it has been in recent years, the need to invest severance funds is much less felt.

In the US, inflation has been soaring since the end of 2021, so it is safe to assume that BTC provisions of severance pay funds could also have increased. Practically a portion of the dollars paid into the severance fund each month are converted instantly into BTC, thereby accumulating satoshis as well as dollars over time.

When the employment relationship ends, the employee requests the payout of the severance funds to the company he/she has entrusted with their custody, and the company will pay out both the dollars and the accumulated BTC.

While the dollars accumulated over the years will inevitably have lost purchasing power, Bitcoin may have gained some. It is still a risky investment to all intents and purposes, but given the current high level of inflation, even the mere accumulation of dollars risks causing losses.