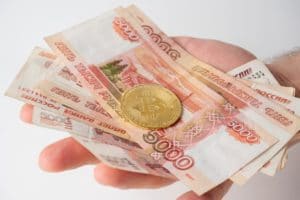 Russia is not circumventing sanctions with Bitcoin

There is a lot of talk these days about the possibility that Russia could use Bitcoin to circumvent international sanctions.

Why can’t Russia use Bitcoin to circumvent sanctions?

The founder and CEO of Italian crypto exchange The Rock Trading, Andrea Medri, answered this question during a recent interview.

Medri therefore has a lot of experience with cryptocurrency transactions, so he is familiar with how money flows through the network.

To a specific question about whether Russia could use Bitcoin to circumvent sanctions, Medri replied bluntly: no.

In fact, although the flows have increased, i.e. on average quadrupled, these numbers lead us to categorically exclude this hypothesis.

“The total additional volume of BTC and USDT in the days from 24 February to 7 March amounts to $350 million. This is too small a size to cover the movements needed to offset the sanctions, which are orders of magnitude 100 times larger”.

It is therefore certain that Russia is currently using neither Bitcoin nor any other cryptocurrency to circumvent sanctions.

Medri also points out that it is not possible for a state that handles such large volumes of international transactions to quickly switch from the traditional financial system to crypto, because to do so would require an adequate technological infrastructure that takes a long time to develop.

Russia are not using either Bitcoin or any other cryptocurrency to circumvent sanctions.

Instead of focusing on the movements of the Russian State, the focus is on those of the oligarchs.

Medri does not rule out the possibility that the oligarchs might use Bitcoin to avoid confiscation. In fact, the super-rich could use cryptocurrencies to secure their assets. However, when analyzing the flows, he says that this is not happening at the moment.

In other words, the volumes of Bitcoin being exchanged and sent in that part of the world are too small to support their use by oligarchs to secure the bulk of their assets.

“If you look at the analysis of the daily activation of Bitcoin addresses, and also the number of transactions on the blockchain, you can see how both parameters follow a stationary trend since the beginning of 2022, incompatible with fresh capital entering the system”.

Medri also adds that the increase in cryptocurrency trading volumes in that part of the world seems to be mainly due to ordinary citizens, as large transactions do not seem to have increased much.

The fact is that transactions in BTC cannot be stopped, restricted or hindered in any way if one has access to the Internet, which is especially helpful for those who have trouble exchanging money on traditional platforms.

While this is relatively easy to do with small amounts, it becomes more complex with large amounts because it is very difficult to hide large transactions, even using Bitcoin.

Therefore, cryptocurrencies in Russia and Ukraine seem to be helping the people and not specifically the elite.

The post Russia is not circumventing sanctions with Bitcoin appeared first on cryptodailynews24.com.