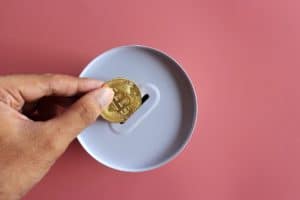 In a message via Twitter, the Ukrainian government announced that cryptocurrency donations would also be accepted to help the country in its conflict with Russia. Vice-President and Minister of Technological Innovation Mykhailo Fedorov is certainly the most active politician in this respect. Since the beginning of the conflict he has launched several appeals to the tech world to urge them to sanction Russian citizens.

A week ago via Twitter, he also appealed to all cryptocurrency exchanges to do their part in blocking users of Russian nationality in order to prevent them from using cryptocurrencies to somehow circumvent the sanctions.

His appeal so far seems to have fallen on deaf ears, even though Coinbase has blocked some 25,000 accounts of Russian users in recent days. At the same time, the Ukrainian vice-president also thanked those cryptocurrency operators who are helping his country through donations, such as Uniswap.

The people of @Ukraine are grateful to @uniswap for their new “donate to Ukraine” feature which automatically exchanges any of their listed tokens to ETH for us. Could @uniswap put it on your home page to help direct more of the crypto community to assist? https://t.co/w8accgNZi8

On 14 March, the Ukrainian government activated a website entirely dedicated to cryptocurrency donations, as announced by Vice President Fedorov on Twitter

OnlyFans has announced in recent days that it has donated 500 ETH (approximately $1.3 million in countervalue) to the DAO, a decentralized autonomous organization that raises funds to support the war-torn Ukraine. Company sources have announced that this is only the first support of a long-term programme of aid to the Ukrainian population and government.

The bill, adopted by the Ukrainian parliament last month and enacted into law by President Volodymyr Zelensky himself last Wednesday, will in practice allow foreign and Ukrainian cryptocurrency exchanges to operate legally in the country for cryptocurrency transactions and exchanges.

In addition, traditional banks will be able to open cryptocurrency accounts for all customers who request them. This is one of the most open regulations towards the sector not only in Europe.

The news comes after US President Joe Biden issued an executive order on Friday aimed at analyzing the possible effects of a precise regulation on cryptocurrencies and also those of the adoption of a new digital state currency.