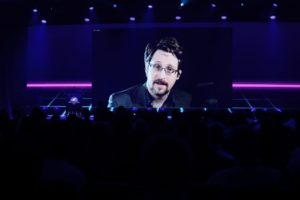 Edward Snowden, former CIA computer expert and protagonist in 2013 of a controversy with the United States over allegations of espionage, has returned after a long time to speak in an interview.

On 27 February, during the Camp Ethereal 2022 event, Snowden spoke about cryptocurrencies and blockchain in a long interview with Marta Belcher, a lawyer, cryptocurrency expert and member of the Filecoin Foundation.

In particular, the American cyber expert explained how he believes governments view cryptocurrencies as “an evolving threat“, how cryptocurrencies “transform power relations”, and how Ethereum “suffers from the same privacy problems as Bitcoin”.

During his speech, he also referred to central bank digital currencies (CBDCs) as “crypto-fascist currencies”.

“I think governments correctly perceive (crypto as) an evolving threat to traditional tools which they’ve grown accustomed to. The cryptocurrencies are a danger to the government’s “ability to impose regulation upon private lives, and more broadly, private trade”.

In this way, Snowden argues that all governments around the world, and especially that of the United States, are increasingly intrusive into people’s private lives. In a recent tweet, he described China and the US as increasingly similar.

It is my belief that market forces, democratic decline, and a toxic obsession with “national security”—a euphemism for state supremacy—are drawing the US and China to meet in the middle: a common extreme.https://t.co/QjsIQ1PXYn

Snowden then went on to talk about state-controlled cryptocurrencies, which many governments are considering implementing in order to provide a viable alternative to private digital currencies. For Snowden, this form of currencies are “crypto-fascist currencies” that could “casually wipe out the savings of every wage-earner”.

“We don’t realize that we have immediately been subordinated and collectivized to the central actor in the economy. The dollar is that today in its electronic form. But the cash, the sort of physical legacy form of it… When you go down to the bodega, or the deli, and you buy a ham-and-cheese, the guy who presses the button on the register that’s been there since 1975, and the till pops out and he puts the dollar in and gives you a dollar back, that still works—regardless of what the government is interested in. As we move towards increasingly electronic versions of cash… our freedom from permission becomes ever more finite and ever more limited. And increasingly we’re being asked to step more through these gates, and that is a tremendous concern”.

This is what Snowden said during his lengthy speech about CBDCs.

The case of Canada

As an example of this theory, about the willingness of governments to put cryptocurrencies under some kind of control, Snowden cited the recent example of Canada, during the harsh protest of truck drivers against the anti-Covid-19 restrictions imposed by the government. A federal judge allegedly froze several million dollars from people financially supporting the protests. Among the funds seized were also funds in Bitcoin and Ethereum, the former CIA technician said.

“The idea that Canada of all places would do this—and I think most people see Canada as a pretty enlightened government—is really an illustration of the concern”.

Snowden also recently confessed that he of all cryptocurrencies would prefer to use Zcash, due to its high rate of privacy, since it allows information contained in its public blockchain to be encrypted.

The post Edward Snowden: “Cryptocurrencies a threat to governments” appeared first on cryptodailynews24.com.