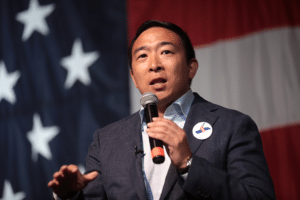 Andrew Yang: a DAO to change US politics

Andrew Yang is an American entrepreneur and philanthropist, crypto advocate and political activist. He recently spoke about his new political project, Lobby3 DAO, claiming that it will give citizens new opportunities to influence the country’s political processes.

He was a candidate in the presidential primary in 2020, and in the primary for mayor of New York City last year, also for the Democratic Party.

According to Yang, about 90% of Americans currently live in districts that are strongly aligned with either the Democratic or Republican party. In these districts, political representatives have little incentive to listen to citizens who belong to the local minority or who are not their potential voters. This means that only those citizens who are in their favour tend to be heard.

DAOs could offer an alternative.

DAOs according to Andrew Yang

Yang argues that DAOs could be the defining feature of the new 21st-century democracy – a “liquid” democracy in which people cast their votes not generically for various candidates, but individually on certain issues.

His idea is to give the citizen the possibility to delegate other people, deemed more competent or willing, to take decisions on specific individual issues.

So instead of delegating everything to one person, the citizen could choose to delegate a different person on each individual issue, thus choosing by competence and not by sympathy.

In fact, it is absolutely impossible for a politician to be an expert on all the issues he or she will have to deal with once elected, and it is usually the politician, and not the citizens, who choose which experts to get help from. In such a scenario, it is not uncommon for councillors to be chosen not for their real expertise, but only for their level of loyalty to the politician.

Lobby3 will allow fast and frequent voting on individual issues, in particular to direct money to those deemed most important to its members.

In order to gain access, citizens will be required to contribute money, with two levels of 0.07 and 1 ETH respectively, and a third level for institutions and wealthy citizens with a minimum contribution of 40 ETH.

The importance of decentralized organizations

It is worth remembering that DAOs should not have a leader, and should not be managed by anyone other than the community of members themselves. That is, all decisions should be taken by community vote.

If this experiment proves to be successful, it is possible to imagine that other similar initiatives could arise in those democratic countries where citizens can organize themselves to pool their forces. In this way, non-governmental organizations can be created that can have real political influence.

The post Andrew Yang: a DAO to change US politics appeared first on cryptodailynews24.com.