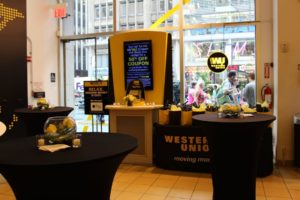 In addition to the sanctions imposed on Russia following the invasion of Ukraine, the currency transfer giant Western Union (Money Transfer) has also suspended its services.

The consequences of a war

The consequences of what the Russian president calls a “special operation” and what the rest of the world considers an invasion in Ukraine have not been long in coming.

The international community, institutions and states all over the world have unanimously condemned the war started by Putin on 24 February and have taken action with extremely heavy commercial, financial and political sanctions.

The most important sanctions imposed on the Euro-Asian giant are the energy blockade by most of the West and certainly the exclusion from SWIFT (the most widely used international payment system in the world).

On top of all this, Western Union is also blocking its access.

The Colorado-based remittance giant has announced that it is discontinuing both inbound and outbound services to Russia and Belarus. Following internal meetings and talks with its main customers, Western Union, the leading Western company offering an alternative in terms of safe haven assets and fiat currencies, has ceased operations in the countries involved in the invasion of Ukraine.

Kiev, through its president Zelensky, had in recent days called for greater intervention by international institutions and the establishment of a no-fly zone.

While the no-fly zone has been temporarily rejected by NATO, the call for tougher sanctions has not gone unheeded.

“We join the international community in expressing sincere hope for a diplomatic and peaceful resolution. Meanwhile, our priorities remain the well-being and safety of our employees, as well as continuing to support the Ukrainian people, including the growing number of refugees seeking safety”,

this is what the American company communicated in an official note.

Not only on the eastern front, but also on the Ukrainian side, the transfer giant has made an important contribution.

The company has waived its commissions by making its services free of charge for Ukrainian citizens, sent humanitarian aid and made large donations, and severely condemned Moscow’s actions.

WUMN (Western Union Money Transfer) joins other global financial companies that have denied their services to the Russian Federation, including PayPal, Wise, Remitly, Transfergo, Zepz and Revolut, as well as Visa and Mastercard.

Visa and Mastercard, unlike the other companies, have blocked their services, but have allowed the the use of their circuits and cards within Russian and Belarusian territory.