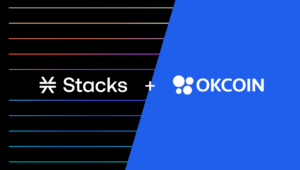 The well-known crypto exchange Okcoin has launched an initiative to support the development of Bitcoin-based projects.

We're partnering with @StacksStartups & venture partners to form the next chapter of #Bitcoin. We call this effort the Bitcoin Odyssey.

The initiative is called Bitcoin Odyssey, and is being implemented in collaboration with Stacks Accelerator, Stacks Foundation and other partners.

The goal is to support the next chapter of Bitcoin‘s evolution, with e.g. DeFi and DAO.

The Bitcoin protocol has undergone few structural innovations in recent years. However, thanks to the Lightning Network and Taproot it is ready to be used as a basic infrastructure for further developments that do not require changes to the underlying protocol.

Okcoin and Stacks have together committed as much as $165 million to support projects to develop decentralized apps based on the Bitcoin protocol.

Currently, DeFi and DAOs are very underdeveloped on Bitcoin, and concentrated mostly within the Ethereum ecosystem, and partly on Terra, BSC (Binance Smart Chain), Avalanche, Solana, Fantom, Tron, Polygon and other blockchains.

No stablecoin based on Bitcoin

In this respect, Bitcoin is far behind, although it must be said that this is certainly not its core business. Bitcoin remains the world’s leading cryptocurrency as a risk-on hedge against inflation and, thanks to the Lightning Network, as a medium of exchange.

Currently, there is for instance no widely used stablecoin based on Bitcoin, although USDT for instance originated as a token exchangeable on Omni, a layer built on Bitcoin’s blockchain.

Thanks to second layers on Bitcoin, such as LN, it is not only possible to create complex smart contracts, but it is also possible to issue tokens, as on RGB.

After the upgrade to Taproot, the Bitcoin ecosystem is also ready to welcome new decentralized dApps to create and manage DeFi and DAO protocols.

Okcoin is not the only crypto exchange working on this kind of Bitcoin evolution, but since Stacks‘ slogan is “unleash Bitcoin’s‍ full potential” we can expect great things from this initiative.

In this context, Bitcoin Odyssey is committed to distributing $165 million over a year to projects that are developing concrete products that will accelerate the mass adoption of Bitcoin.

The selected projects will be those working on Web3 solutions, such as metaverse, play-to-earn games, decentralized finance, NFT and DAO, as well as CityCoins and GovTech.