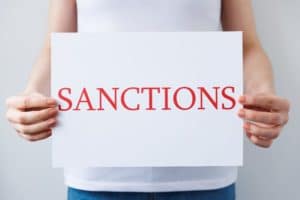 Sanctions against Russia: Estonia calls for restrictions on cryptocurrencies

Following calls to this effect by Ukrainian Vice-President and Minister of Technological Innovation Mykhailo Fedorov, for the first time ever, a Prime Minister of Estonia has specifically called for restrictions on cryptocurrencies to prevent them from being used by Russia to circumvent sanctions.

Estonia’s Prime Minister Kaja Kallas, in talks with US Secretary of State Antony Blinken, called for restrictions to be placed on cryptocurrency transfers to prevent Russians from circumventing financial sanctions the international community has imposed after the attack on Ukraine.

“Our focus must be on full isolation of Russia from the free world”,

Kallas said, reiterating that Russians and Belarusians must be prevented from accessing both cash and cryptocurrency transfers.

This decision has sparked enthusiasm in the crypto world because it would be a sign that the United States is also considering precise regulation and is also evaluating the impacts that would result from the introduction of a digital dollar.

Kallas then spoke in an interview with Bloomberg about the conflict, accusing Putin of wanting to play it all out with his military operation in Ukraine.

“They want to cause as much damage as possible. It seems to me that Putin, in poker terms, has gone all in – so he either wins, or he loses. So it’s up to everybody to make sure that Putin doesn’t win this war”.

At the same time, the Estonian president, who according to some observers could be one of the possible next targets of Putin’s Russia, also reiterated the difficulties in imposing sanctions that affect energy supplies, especially for some countries, such as Italy, which are heavily dependent on Russian gas and oil.

“What we have to understand is that different European countries have different energy dependence. One side is, ‘of course we want to hurt the war machine of Putin and deprive him of his income’, but the other side is that our public has to support the decisions made as well”.

On the other hand, the Estonian government has been working since January of this year to quickly approve precise regulations on the crypto world. The new regulations are aimed at those providing digital asset services in the country.

In addition to the cancellation of anonymity and the traceability of transactions, the new rules should limit the granting of new licences, raising for example the share capital of the applicant, which will have to be at least €125,000, compared to the current threshold of €12,000.

The post Sanctions against Russia: Estonia calls for restrictions on cryptocurrencies appeared first on cryptodailynews24.com.