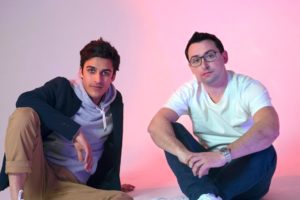 From Robinhood to Atlantic Money

Neeraj Baid and Patrick Kavanagh, having worked at Robinhood on international projects including expansion into the UK which has not yet happened, have seized the momentum to create and launch Atlantic Money, a fintech remittance for the UK market.

So excited for launch day!! Sending money abroad is about to get a whole lot better

Say hello to @atlantic_money as we come out of stealth. The only money transfer provider with a £3 fixed-fee & zero FX markup all the way up to £1million! https://t.co/73ymqwRVwt pic.twitter.com/YRVMX7iZhe

“I’m so excited for launch day! Sending money abroad is about to get so much better! Say hello to @atlantic_money as we come out of stealth. The only money transfer provider with a fixed fee of £3 and zero FX markup up to £1m!”

The startup raised a $4.5m seed round led by Amplo and Ribbit Capital. Robinhood founders Vlad Tenev and Baiju Bhatt have also invested in the company.

At the moment, the service is initially available to UK residents looking to move sums of £1,000 to £1 million in nine other fiat currencies USD, EUR, AUD, CAD, SEK, NOK, DKK, PLN and CZK.

When it comes to competitive advantages, Atlantic Money claims that its core service is UK money transfer, and that it is distinguished in the market by its fixed fee of £3.

Unlike Revolut and Wise, the company charges a fixed rate of £3 with no mark-up on the exchange rate they can provide. For small transfers, £3 is hefty. But once you start transferring more than £1,000, Atlantic Money becomes more competitive.

In this regard, Neeraj Baid said the following:

“Our fees are low. Especially if you get into the £1,000s, you’re looking at 50-80% savings over anyone else in the market, which is something we’re incredibly proud of – we’re also profitable on every transfer”.

Baid reportedly worked at Robinhood Crypto and was the decisive force in putting Dogecoin (DOGE) on the platform, but for Atlantic Money it isn’t time yet.

In this regard, Kavanagh commented:

“One of the first questions we have is whether cryptos can make money transfer faster, cheaper and easier. The answer from the research we have so far is: not yet. But we are agnostic, so if crypto solves the problem we are happy to do so”.

Meanwhile, DOGE continues to get its support from its super influencer Elon Musk, the world’s richest man and founder of SpaceX and Tesla.

Since the beginning of 2022, Musk has been tweeting in favour of the memecoin par excellence, explicitly asking McDonald’s if it accepts DOGE and then revealing that Dogecoin will be accepted in his futuristic Tesla drive-in restaurant in downtown Hollywood.

Not only that, but also the CEO of the large US cinema and theatre chain AMC, after surveys and previews, declared the official date from which it will start accepting payments in DOGE and SHIB and it will be 19 March 2022 to be exact.