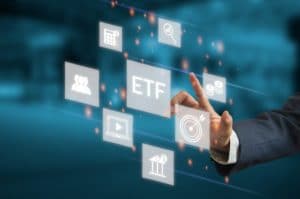 The month of February delivered no surprises and in the top ten ETFs listed for sale in Italy the most predictable are at the top.

ETFs (Exchange Traded Funds) are funds that replicate the performance of an index and are a reliable tool to turn to in the event of a market downturn.

In this regard, another interesting article published on cryptodailynews24.com on 1 February entitled “ETFs as a shield against market declines” highlighted how ETFs were one of the ways to go as a strategy to contain losses, but not only.

One of the problems, if not the main problem with this instrument, is the exposure of some exchanges (including some of the world’s most important) to certain types of shares rather than others.

An example of this is the New York Stock Exchange, where in the Nasdaq (which is composed of approximately 3000 stocks) there is a 50% exposure to stocks in the tech sector.

Ten stocks in the tech sector account for 50% of the value of the index and this is something to take into account.

The S&P 500 also has a similar situation, in this case the value of Big tech is 25% of the total.

With a positive February for cryptocurrencies (BTC +8.3% and ETH +10.4%), the German fund BCHetc – Physical Bitcoin Cash ETC € Acc, which replicates the performance of Bitcoin, topped the list.

Virtual currencies have seen a surge following the war in Ukraine, which has led to all factions for different reasons contributing to the currency’s appreciation.

According to Elliptic, Eliézer Ndinga head of 21Shares said in a note that:

“Cryptocurrencies are linked to one of the few positive episodes observed in this war: the Ukrainian government has reportedly received an unprecedented amount of donations in digital assets, worth around $24.6 million; a godsend in a conflict characterized by strong cyber moves”.

This is not the only aspect that has contributed to the advent of virtual currencies.

In anticipation of the heavy sanctions that would come as a result of the Russian offensive, in unsuspected times the Kremlin had opened up to crypto trading and repealed the law preventing the mining of BTC in the country.

When the Soviet onslaught took the world by surprise and the West’s sanctions came in, squeezing Russia out of SWIFT, it “sought refuge” in Bitcoin and even paid up to $64,000 each.

Gold has always been the safe haven in bad times and this time is no exception.

First the pandemic and then the war between the Russians and the Ukrainians pushed the precious metal to its highs, which also pushed the benchmark funds. The positions just below the Bitcoin ETFs are held until the eighth by funds that refer to gold or its supply chain.

Among them, the VanEck Gold Miners UCITIS ETF has gained 14% over the reporting period (February).

Among the worst performers in February were Russian equity ETFs.

The IShares MSCI Russia ADR/GDR ETF Usd Acc, which is linked to the performance of Russian stocks listed on foreign exchanges, lost 73%.

The Moscow stock exchange has been closed since 28 February and equity has also been hit hard.

According to Luca Riboldi head of investments at Banor:

“The impacts of the Russia-Ukraine conflict on the global economy could be very different, depending on whether the clashes see an end in the coming weeks or continue for some time. In the first case, although we expect the sanctions imposed on Russia by various countries to remain in place for several months, if not years (not least because we think it unlikely that Russia will step back and give up the Donbas region), we expect the situation on goods such as Ukrainian wheat to ease, reopening Ukraine to exports.

On the other hand, should the conflict continue for a long time, the risk is that the war will lead to an exponential increase in commodity prices and energy costs. As it is therefore impossible to predict the outcome of the conflict and Putin’s intentions, having a portfolio with some hedging on certain sectors or anti-volatility asset classes is definitely the best solution to choose at this historic moment”.

Among the flops, the least bad was the First Trust Dow Jones International Internet ETF which completes the list.

The fund is directly linked to the Dow Jones and the 40 stocks with the highest exposure to the internet. The condition for participating companies is to have at least 50% of their turnover linked to this sector.