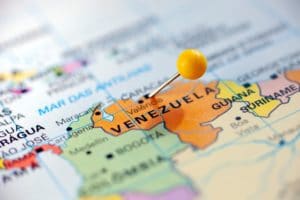 Venezuela: minimum wage raised to half a Petro

A few days ago, Venezuela’s president, Nicolas Maduro, officially announced an increase in the minimum wage in the public sector to half a Petro.

The Petro for raising the minimum wage in Venezuela

The Petro is Venezuela’s national token, launched in 2018, and theoretically pegged to the value of oil.

According to the official website, 1 Petro is currently worth around USD 58.5, but since it cannot be traded freely on the market, this is the price set by the Venezuelan government, not its real market value.

According to these figures, the new value of half a Petro of the minimum wage in the Venezuelan public sector would correspond to just over $29.

However, many salaries in the private sector are already higher, above $100, because the companies that pay them sell their products in dollars.

Maduro has said that Venezuela’s biggest wound is the loss of value of the minimum wage and workers’ wages, and would be due to the war economy which has caused the loss of 99% of the country’s income.

The Venezuelan Petro is supported by Oil

Figures for the country’s GDP over the past decade clearly show how it peaked in 2014 at over $482 billion, collapsing to just over half of that by 2022 according to World Bank estimates. However, the collapse appears to have been continuous, starting in 2015, so it is hardly linked to the war economy.

A major role in the decline may have been played by the hyperinflation that has gripped the country for more than five years.

In fact, the president has also stated that the government is trying to control hyperinflation, which has fallen somewhat in the last two years.

The fact that there still seems to be full-fledged hyperinflation in the country, as prices continue to rise at the rate of 470% per year, makes it difficult to believe that the real value of the Petro is fixed.

It is worth noting that neither its total supply nor its circulating supply is known, so it is effectively impossible to calculate whether or not there is inflation of the money supply.

Why the Petro is not a cryptocurrency

The Petro is not a cryptocurrency, but a national digital currency, centralized and not at all transparent. There is no verifiable public information, and all that is known depends only on the government’s obviously biased and propagandistic statements about it.

In other words, it is just a digital version of the country’s fiat currency, the Bolivar (VED), with another name and a different supply.

The post Venezuela: minimum wage raised to half a Petro appeared first on cryptodailynews24.com.