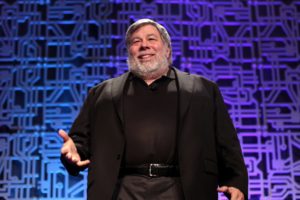 Apple co-founder Steve Wozniak, who has long followed the world of cryptocurrencies with interest, said in a recent interview that Bitcoin is the digital equivalent of gold and the product of a “mathematical miracle”.

Indeed, according to the eccentric billionaire, the most popular digital currency is in some ways even better than gold:

“Gold is limited and you have to look for it; Bitcoin is the most amazing mathematical miracle. I don’t invest in Bitcoin, but I believe in it for the future”.

At the end of last year, Wozniak had already spoken in enthusiastic terms about Bitcoin, describing it also as a valid alternative tool for payments.

In 2020, Wozniak had also launched his own cryptocurrency, called “WOZX“, a token developed by a company he co-founded called Efforce, which focuses on energy efficiency, powered by blockchain technology.

“Can we reduce our energy consumption without changing our habits? That’s our mission”,

Wozniak says in a video posted on the company’s website. Buyers of the cryptocurrency buy a proxy for a stake in an energy-efficient project.

In November, he warned of the real risk that governments will attempt to control cryptocurrencies:

“the problem is that the government will never allow them to be out of their control”.

he said in an interview with Yahoo Finance.

“If it got to the point that everything was being done with crypto, and it didn’t pass through governments for observation and taxation and all that, now governments would just disallow it. They wouldn’t give up their power”.

According to Wozniak, Bitcoin is better than gold

Other cryptocurrencies according to Wozniak

Speaking about the market in general, Wozniak expressed his doubts about too many crypto-related projects being developed, many of which he described simply as “rip-offs“. This fact, in his view, could have negative repercussions on the credibility of the entire industry.

“There are so many cryptocurrencies that come out now; everybody has a way to create a new one, and you have a celebrity star with it. It seems like they’re just collecting a bunch of money from people who want to invest at the very earliest stage, when it’s worth pennies”.

Wozniak had also spoken in the past about the power of Bitcoin as a valuable anti-inflationary tool, when compared to fiat currencies like the dollar.

“Look at the US dollar: the government can create new dollars or borrow them. You will never have a fixed monetary base like with Bitcoin. If there’s inflation and your house grows in value by 1,000% in 40 years, you think you’re a smart investor. But no, you have an old house. You had a new one, but the government taxed 90% of its value through inflation. The government collects all its taxes through inflation”.

He said this in an interview in October last year.