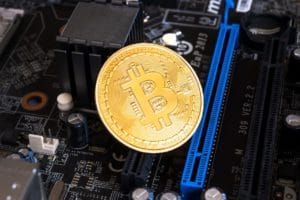 Hive Blockchain will mine with Intel’s new ASICs

Hive Blockchain Technologies (HIVE) has announced that it has entered into an agreement with Intel Corporation to supply its new high-performance ASICs.

The press release also states that the company has entered into a letter of intent with Compute North to host Bitcoin mining machines totaling 100 megawatts in their new renewable energy-based facilities in Texas.

Hive is a Canadian company listed on the Toronto Stock Exchange and Nasdaq, and uses 100% green energy to mine Bitcoin and Ethereum.

Its share price on the stock exchange today has not yet reacted to this news, as the US financial markets have not yet opened, however, it has lost 66% since November.

The value of its shares is clearly correlated with that of Bitcoin, although the growth compared to previous years has been higher.

Intel’s new ASICs will be much more powerful than those currently on the market, and therefore less energy-intensive for the same power output. This means that in the short term, the company may actually reduce its energy consumption, although in the long term it will probably increase it.

Hive blockchain wants to become a leader in Bitcoin mining

Intel’s ASICs will be integrated into an air-cooled system, and will be delivered within a year, starting in the second half of 2022. As a result, the company will increase its hashrate by 95%, to a total of 1.9 Exahash per second.

The company’s goal is to become a technology leader in the mining industry through research and development, hashrate analytics, and efficiency optimization to maximize return on investment.

An increasing amount of Bitcoin’s hashrate is now concentrated in the US, both because China has completely backed out and because it is easier to find renewable energy for environmentally friendly mining in the US.

Since it is not possible to significantly reduce Bitcoin’s energy consumption in the short or medium term, the only possible alternative to reduce its environmental impact is to use non-polluting energy sources, as Hive does.

In any case, it is worth mentioning that the current CO2 emissions from Bitcoin mining are estimated to be less than 0.1% of the global total.

The post Hive Blockchain will mine with Intel’s new ASICs appeared first on cryptodailynews24.com.