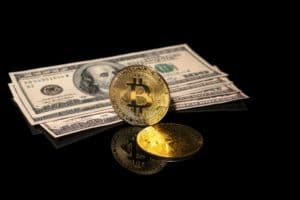 According to CoinShares, investment products in digital assets saw inflows of $127 million last week. That’s an increase of $36 million from the previous week, and the largest volume of weekly inflows since 12 December 2021.

This is very comforting for the crypto markets as it seems to suggest cautious optimism as investors appear to be expanding their exposure to digital assets despite the current geopolitical uncertainty. Not even the expected monetary tightening by central banks seems to be able to stop this phenomenon.

Moreover, since the outbreak of the war in Ukraine, the degree of correlation between the Bitcoin price trend and the Nasdaq 100 index has halved, showing that paradoxically there seems to be less fear in the crypto markets at the moment than there is in traditional markets.

It is enough to consider that compared to the end of January, the current level of the Nasdaq 100 index is much lower, while the price of Bitcoin is much higher.

Last week, the biggest inflows into crypto funds went into Bitcoin, as is often the case, with as much as $95 million of the $127 million coming in. ETH funds, on the other hand, only saw inflows of $25 million, despite this being the largest volume in 13 weeks.

So it seems that institutional investors, the preferred clients of regulated crypto funds, are taking advantage of these relatively low price points to accumulate Bitcoin, or rather to broaden their exposure to the price of BTC since these funds do not allow clients to physically accumulate tokens.

However, it is not clear whether this dynamic is only due to the fact that Bitcoin prices have been particularly low for a couple of months now, compared to the end of 2021, or whether it also has something to do with the ongoing war events.

Bitcoin can in fact be used to circumvent the bans, restrictions and sanctions placed on international transactions on Russia and Ukraine, and this may have contributed not only to an increase in interest in it, but also to the partial decoupling from the Nasdaq.