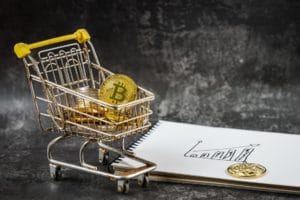 Last November, the large US investment bank Morgan Stanley increased its stake in the world’s largest fund investing in Bitcoin, the Grayscale Bitcoin Trust, by buying around 1 million shares in the fund, bringing their stake in the fund to over $300 million.

According to Glassnode’s data, institutional investors have resumed accumulating shares in the fund in recent months, thanks in part to the approximately 30% discount on the shares after the cryptocurrency market declines.

Glassnode reported that institutional investment in the fund increased by about $100 million in the first two months of the year.

The Grayscale Bitcoin Trust, which holds about 3.5% of the Bitcoin currently on the market with about 32 billion worth of assets, is paying a discount of about 30% from its November highs due to the collapse in Bitcoin prices. At the same time, the fund must also be discounted about 13% from the value of Bitcoin itself since the first Bitcoin ETFs traded.

said Bobby Blue, an analyst at Morningstar in February.

It’s no coincidence that the company is pushing to get the SEC to greenlight its first Bitcoin spot ETF, which has been awaiting approval from the US stock exchange authority for months.

Grayscale is “threatened” by competition from ETFs

According to analysts, demand for GBTC stocks has been buoyed by the premium to NAV, which has facilitated arbitrage by hedge funds buying new shares and then, after the expiration of a lock-up period, selling them at the market price for handsome profits.

But this mechanism has disappeared since the launch in February 2021 in Canada of the Purpose Bitcoin ETF, the first Bitcoin spot ETF, which immediately attracted many institutional investors eager to invest in a product directly linked to Bitcoin. Many investors shifted their Bitcoin investments from GBTC to this new instrument.

Grayscale’s fund tried to remedy this by purchasing new shares of its own, but the launch of other ETFs made this attempt futile.

Grayscale has repeatedly argued in recent months that “the most efficient way to resolve any discrepancy between GBTC’s share price and NAV” would be to be able to convert to a spot ETF, something that “the US investment community is eager for, is ready for and deserves”.