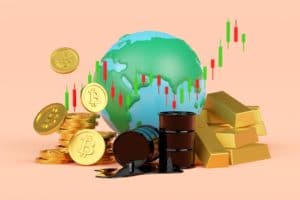 Digital gold and black gold: Bitcoin and oil in comparison

As the crisis in Ukraine unfolded, the world’s stock markets took a downward turn and so did most currencies.  However, some surprises have come from unexpected sectors, including some US banks and financial companies, the mining industry, good old oil and Bitcoin.

Black gold broke through the $106/barrel barrier, up 6% from pre-crisis levels.

However, the appreciation of the commodity is not the only one to have caused astonishment among those in the industry.

In fact, another outsider, Bitcoin, has hit the headlines with an even greater surge in value.

Bitcoin and the war

Bitcoin appreciated and peaked at 43,000 US dollars before falling back slightly to around 40,000.

This performance is the result of a number of factors that provide new parameters to take into account for the future of the virtual currency.

One of the reasons for BTC’s growth is the rush by Ukrainians and Russians to buy the currency as a means of preserving wealth.

The rush to buy it has pushed up the value of the “Satoshi” and led to the coin being requested in Russia for as much as 64,000 dollars a unit.

As a result of sanctions imposed by Europe and the United States, the Russians have seen the SWIFT system (the world’s most widespread Western payment system) close its doors and have turned to the Chinese counterpart, CIBS, which has made a decisive contribution to its appreciation.

The Yuan and Bitcoin are in fact the only two currencies in the world to grow and strengthen from all this.

The other big reason for the virtual currency’s growth is the fact that Bitcoin is, according to some investors, disengaging from a slavish relationship with equities.

This reversal is recent and has also been influenced by events in the Donbas and Ukrainian independence provinces which are pushing the currency.

Crisis equals fear which consequently turns into a rush for safe-haven assets and for many Bitcoin is one.

Bitcoin is not alone

Bitcoin is not the only cryptocurrency to have risen since the Russian invasion of Ukraine.

Among the virtual currencies that have distinguished themselves in a positive way is Ethereum.

Vitalik’s coin has managed to perform 10% since the beginning of the tensions with Russia.

The founder of Ethereum recently declared on Twitter that “his” crypto is bipartisan and can be used by anyone in any part of the world, but that his attitude was one of condemnation towards Putin.

Despite Vitalik’s tough political stance, the virtual currency flew to $2908.88, leaving everyone speechless.

Developments of the crisis will be decisive even if we do not know to what extent for the performance of the main cryptocurrencies.

The post Digital gold and black gold: Bitcoin and oil in comparison appeared first on cryptodailynews24.com.