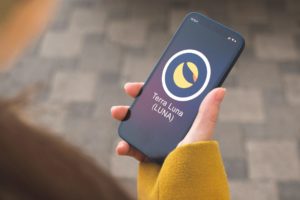 Terra (LUNA) was one of the top-performing cryptocurrencies in February 2022.

It is worth noting that only ADA made a loss (-8%), while all the others, excluding stablecoins of course, increased their value during the month.

The performance of Terra (LUNA)

In general, however, monthly increases have not exceeded 26%. The only exception, among the top 10, is LUNA, the native cryptocurrency of the Terra protocol.

On 31 January it had hit its lowest point since late November, falling to $44. At that point, it began a massive climb back up, closing the month at over $83, a monthly gain of over 72%.

However, the current level of around $93 is in line with the level at the end of December. It was therefore a rebound after a strong and abnormal loss made entirely in January.

The increase was concentrated between February 4 and February 8, when it rose from $0.6 to $0.9 in four days, before falling back to below $0.8.

It is worth noting that at the end of December it had touched $1.

AVAX, the native cryptocurrency of the Avalanche protocol, also performed well. Though inferior to LUNA and XRP, it still closed the month with +24%.

BNB, on the other hand, showed a much more limited performance (+5%), and especially Solana, which closed the month with a measly +1.8%. Solana’s network also suffered from other technical problems that adversely affected its financial performance.

Bitcoin and Ethereum, on the other hand, followed a similar path, closing with +15% and +14% respectively.

As with other cryptocurrencies, this was mainly a rebound after hitting lows in late January.

Cardano in the negative

The only one that has not made such a rebound is ADA, the native cryptocurrency of the Cardano protocol, which has been falling almost constantly since the beginning of September 2021, when it hit an all-time high of over $3. 2021 closed at $1.3, January 2022 closed at $1, and February below $0.9. At the moment, the price has recovered to $0.9.