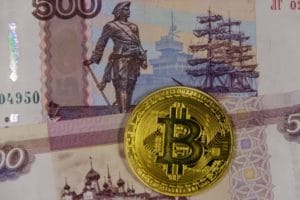 Do people in Russia use cryptocurrencies to circumvent sanctions?

It’s pretty clear that in Russia, a country that according to Chainalysis’ 2021 global crypto adoption index ranks 18th in the world in cryptocurrency adoption, people are actually using digital currencies to try to get around the very tough sanctions that are blocking normal financial activities.

Sanctions boost cryptocurrency use in Russia

According to recently released data from the company Kaiko, exchanges between the ruble and Bitcoin have surged since Russia decided to invade Ukraine. On certain P2P platforms, it appears that some Russians are buying Bitcoin for as much as $64,000, almost 50% more than its current price.

The harsh sanctions that the international community is imposing on Russia for its attack on Ukraine is making life very difficult for many Russians, who are finding it very difficult even to withdraw money from ATMs.

The ruble is down 27% against the dollar since the beginning of the year and is trading at over 100 rubles per US unit, the weakest level on record.

Cryptocurrency adoption in Russia increased after sanctions in 2014

According to many observers, the spread of cryptocurrencies in the country began in 2014, the year when the first sanctions were imposed on Russia, which, according to some figures, cost the Soviet country’s economy up to $50 billion a year.

This is why the new harsh sanctions will only increase the use of crypto assets which, being decentralized, clearly cannot be controlled by any external authority.

Ukraine would like to block crypto exchanges in Russia

Ukraine calls for the blocking of exchanges for Russian citizens

Ukrainian Deputy Prime Minister Mykhailo Fedorov, who is also the country’s Minister of Digital Transformation, has in recent days called on Twitter for cryptographic platforms to block Russian accounts, precisely in order to avoid circumventing the financial and economic sanctions imposed on Russia.

At the same time, the Ukrainian minister himself has asked for and obtained large amounts of donations in cryptocurrencies in recent days, as he wrote on his Twitter profile.

The use of crypto to circumvent sanctions

On the other hand, the use of cryptocurrencies to circumvent sanctions has already been successfully tested for years by both North Korea and Iran, two nations that have long been hit by harsh economic sanctions from the international community.

North Korea has made billions of dollars in cryptocurrency from cyber attacks, while Iran has used cheap energy to mine Bitcoin, according to Caroline Malcolm of the analytics firm Chainalysis.

The Russian government could also speed up the process of its digital ruble, which the Russian central bank estimated would see the light of day by the end of 2022, after the completion of tests in December last year. The digital ruble, according to the bank itself last year, would make the country much less dependent on the US dollar for its international transactions.

With China also reportedly ready to launch its own digital currency, the two countries, whose trade relations are clearly intensifying these days, could establish a parallel cryptographic payment system.

The post Do people in Russia use cryptocurrencies to circumvent sanctions? appeared first on cryptodailynews24.com.