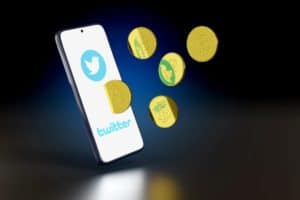 Google also saw a spike in searches for the word Bitcoin yesterday.

Why have Bitcoin mentions on Twitter and Google searches increased?

There are two factors behind these spikes.

The first, of course, is the rapid and consistent price movements.

However, it is probably the second factor that had the biggest impact yesterday.

This is the fact that Russians are buying Bitcoin en masse by getting rid of their national currency, the ruble.

The ruble has lost more than 20% of its value measured in US dollars over the past four days, and there are severe restrictions in Russia on the use of fiat currencies, especially for international transactions.

It is therefore not surprising that many Russians are buying Bitcoin, as P2P transactions in BTC are in no way blocked or restricted.

It is also worth mentioning that using the Lightning Network, transactions are also very fast, extremely cheap, anonymous and untraceable.

The Russians are buying Bitcoin

It is possible that the rise in the price of Bitcoin in recent days is also attributable to the increase in demand from Russians, with the price on Russian P2P platforms soaring to over $60,000.

This dynamic has caused interest in Bitcoin to explode, as it effectively allows the Russians to circumvent sanctions due to the war.

However, it is worth remembering that the vast majority of public opinion these days is focused on the war, so Bitcoin is a somewhat marginal topic. The fact that Bitcoin has also appeared in the current war scenario, for example through donations to Ukraine, has made it one of the most interesting topics these days, after the war itself.