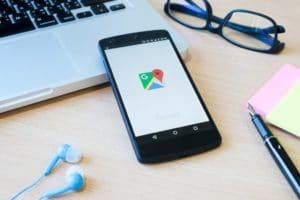 Google Maps could have predicted the invasion of Ukraine

At 3:15 AM (CET) on the day of the Russian invasion of Ukraine, Jeffrey Lewis, a professor at the Middlebury Institute in California and a computer expert, had tweeted that on the basis of data from the live traffic function of Google Maps there was a huge traffic jam in the area of Belgorod in Russia, near the border with Ukraine.

According @googlemaps, there is a "traffic jam" at 3:15 in the morning on the road from Belgorod, Russia to the Ukrainian border. It starts *exactly* where we saw a Russian formation of armor and IFV/APCs show up yesterday.
Someone's on the move. pic.twitter.com/BYyc5YZsWL

“I think we were the first to see the invasion. And we saw it in a traffic app”.

Using Google Maps to predict the invasion of Ukraine

In short, the technology predicted Russia’s attack hours in advance.

A few hours before Lewis’ tweet, Russian President Vladimir Putin had announced a “special military operation” in the Donbass, a region of eastern Ukraine, where everyone thought the Russian attack would take place. But the increased traffic that Lewis recorded using the Google Maps app was actually in another region of Ukraine, north of Kharkiv. The traffic jam would have slowly extended to the border, where it then disappeared.

Google did not want to comment on the news launched by Lewis, who argued how big data held by large technology companies could be of great help in such dramatic times.

“I think big data companies often don’t want to face squarely how useful their data can be,” Lewis said. “I mean, it’s cool when we do it, right? It’s maybe less cool if the Russians were able to do something similar to, you know, spotting an offensive from Ukranians”.

Meanwhile, Google announced yesterday that it had disabled its very Live traffic feature in Ukraine to protect users in their attempt to escape the war.

“Google said only that it had taken the action for the safety of local Ukrainian communities following consultations with sources including regional authorities”,

Google’s move is said to have been prompted by the use of apps to track the movements of troops and civilians. This decision comes after the Ukrainian authorities called on the population to dismantle all road signs precisely to make the advance of Soviet troops into Ukrainian territory more difficult.

“Dismantling road signs on all roads of the country. Priority #1 – indicators, names of settlements. Collected signs are handed over to local authorities and roadmen”.

“The enemy has a pathetic connection, they don’t orient the terrain. Let’s help them go straight to hell”.

The post Google Maps could have predicted the invasion of Ukraine appeared first on cryptodailynews24.com.