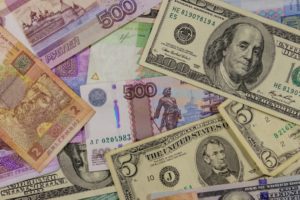 As the effects of international sanctions against Moscow for starting the war between Russia and Ukraine are awaited, the local Central Bank is taking its first countermeasures. These include raising the exchange rate between the ruble and the dollar.

Fleeing the ruble: the exchange rate against the dollar rises

The Central Bank’s decision was made to prevent a flight from the local currency, which has seen its value plummet on the markets in recent days. The sanctions imposed by Europe and the United States in the wake of the outbreak of war between Russia and Ukraine are intended to strangle Moscow’s economy and, judging by the markets’ reaction, they are on the right track.

The ruble has fallen a further 30% on the Asian markets in recent hours. It is also for this reason that the Russian Central Bank has decided to open trading three hours late today. In the meantime, ATMs have been rushing to Moscow in search not only of rubles, but also of US dollars.

The effect of sanctions

This panic was triggered by the “financial nuclear weapon”, i.e. the exclusion of some Russian banks from the SWIFT system, the international payments circuit. In addition to this harsh sanction, Europe, the United States, Canada and the United Kingdom have decided to freeze the Russian Central Bank’s foreign currency reserves held abroad. According to the Italian newspaper Il Sole 24 Ore, these reserves amount to 643 billion dollars.

This double action has the power to put pressure on the rouble, devalue it and ultimately create inflation in Russia.

This is why the rush to ATMs to withdraw dollars, and not rubles, has started, a sign that the more astute have understood that their currency is rapidly devaluing.

The Russia-Ukraine war has plummeted the value of the ruble

While Ukraine is under siege, Russian President Vladimir Putin has waved the nuclear threat, the real one, in response to the tough sanctions that are hitting his country. In an official announcement, Putin said he had put the Russian military’s nuclear deterrent system on alert. Some say he is also frustrated that the military offensive is not going according to plan, given the resistance of the Ukrainian people.

Negotiations between the two warring forces are due to begin today. The place chosen is at the height of the Pripyat river, a stone’s throw from the Chernobyl nuclear power plant, a place that evokes ghosts but was a viable alternative to negotiations on Belarusian territory.

The “cease-fire” promises to be anything but a foregone conclusion, but as Ukrainian President Zelensky said, “let’s try”.

The conditions remain to be seen. The whole world is watching anxiously and holding its breath for the fear of a nuclear war and an unprecedented economic crisis.