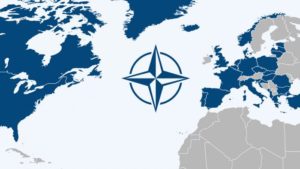 As leaked yesterday, today the extraordinary summit of the NATO countries will meet at 9 AM (3:00 PM CET).

Founded in 1949, the Brussels-based organization of the United States, Great Britain, France, Italy, Norway, Belgium, etc. is responsible for the military and political safeguarding of the interests and freedom of its member countries.

In the meantime, following the Russian bombings and ground attacks on Ukrainian territory, Germany has already declared a freeze on permits to use the Nordstream 2 gas pipeline.

The pipeline would have significantly increased and facilitated gas supplies from Russia to Europe.

This countermeasure, however, has not remained unique: yesterday European government representatives were already talking about exemplary sanctions against the Kremlin.

Following the Defence Council meeting, Lorenzo Guerrini, Defence Minister, said that “Italy fully supports the decisions taken by NATO and will participate in the measures to strengthen deterrence that the Atlantic Alliance has planned. We have given our willingness to increase and extend our presence in the operations in which we already participate on the eastern flank. We have also assured our readiness to participate with our contingents in further reassurance and deterrence missions on the south-eastern flank, which may be envisaged by the Alliance.

Following Putin‘s heavy-handed statements in his speech and the subsequent attack, there were heavy consequences on the markets.

Cryptocurrencies are no exception and have generally lost ground following the invasion.

Ethereum co-founder Vitalik Buterin is of Russian-Canadian descent and has taken a clear stand against Moscow’s actions.

While specifying that Ethereum is superpartisan and a currency of all for all, Vitalik wanted to clarify that he instead has a very clear position condemning what happened.

As a result of the military crisis, the World Cup to be held in Qatar is at risk and could be the next casualty of this war.

The Ukrainian football championship has been suspended by its federation and the match between Russia and Poland is scheduled for 24 March on Russian territory, about which the European state has expressed great concern.

In a statement, the Polish football federation has informed UEFA that it is considering a solution, including playing the match in a neutral and safe venue.

As if that were not enough, UEFA will remove the Champions League final from Moscow and redefine a new assignment in the coming days.

The post The NATO meeting appeared first on cryptodailynews24.com.