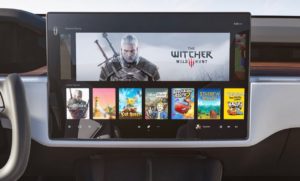 Since Tesla first introduced games on its cars in 2019, the list of games available on its dedicated “Tesla Arcade” platform has slowly grown to include just under 20 games.

But now Elon Musk, ahead of the launch of self-driving cars, is reportedly seriously considering expanding the game release platform, which for now would be limited to just a few games, to have a release system like Sony’s with the Playstation store or Microsoft’s with the Xbox store.

The electric car company is thinking of implementing the possibility for cars to access the thousands of games on the Steam platform.

As is often the case with official statements and corporate news announcements, Musk made the announcement via a rather cryptic tweet as is his style.

“We’re working on the general case of running Steam games on a Tesla rather than specific titles”,

“The former is obviously where we should be in the long term”.

So far, Cyberpunk 2077 has been a long and winding road, and the fact you’ve stuck with us, kept in touch, and shared so many amazing stories and content with us warms our hearts.

From across the whole of RED, to you: Thank You! pic.twitter.com/hAzYz7jqzX

Musk has repeatedly said how he thinks entertainment on the new self-driving cars, which are projected to be ready by the end of the year, is crucial. A team of engineers is working specifically on the Arcade platform, which was created specifically for entertainment in Tesla cars.

In December, Tesla had to make changes to its passenger play function on cars when they are in motion, after a specific request to do so from the US Traffic Safety Administration (NHTSA).

The US traffic safety authority warned of the risks of the Passenger Play feature on cars, saying in a statement that it “could distract the driver and increase the risk of an accident”.

The investigation began in August into Tesla‘s autopilot system after a dozen cars using the feature crashed into parked emergency vehicles. In addition, according to NHTSA’s own data, some 3142 road deaths in 2019 were caused by errors due to driver distraction.

Tesla‘s entertainment system, which includes not only video games but also other features for passenger entertainment, uses a customized Linux operating system and is based on CPU architectures similar to a desktop PC.

In short, despite the fact that the authorities are very dubious about the safety of increasing the possibility of playing games in cars, Musk doesn’t seem to have any intention of stopping in what he sees as a new concept of driving and travelling by car in the near future.