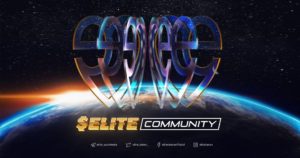 Dubai: $Elite, the new token with influencers like Gianluca Vacchi and Flavio Briatore

Among the projects currently creating innovation within blockchains’ universe, an emerging and interesting contender is the $ELITE token. $Elite is an original and extremely innovative project, born from the brilliant mind of Mario Colabufo, an entrepreneur and growth hacker from Milan.

$Elite token is a project based on the fusion of three of the most important inventions of the 21st century which have influenced our lifestyle and the current market: mobile phones, social media, and blockchain.

The $Elite roadmap will elaborate on the exceptional potential of the project to come in the future, a topic that will be explored in one of the most luxurious, innovative, and important cities of the Emirates, Dubai.

On March 4th, at the exclusive location represented by the Burj Al Arab, the most iconic hotel in Dubai and symbol of luxury that characterizes the city, a private launch event will take place

The private event will involve the network of international entrepreneurs connected to the CEO of $Elite, consisting of some of the most influential personalities in the space such as Gianluca Vacchi, Flavio Briatore, and many other celebrities from music and sports.

During the next two days, it will be possible for guests to meet one on one with Mr. Colabufo, where guests will be able to deepen their understanding of Elite, followed by a private AMA where they can express their curiosity surrounding the project. Utilizing the current benefits of NFTs, the Metaverse, and play2earn gaming, in conjunction with their core focuses, $Elite is set to create an ecosystem unlike any other.

Starting with a subscription to Elimobile, it will be possible for customers to access the exclusive platform Elysium, within which you can buy exclusive content. Content will be available as NFT, created directly by some of the most current influential and important personalities, content will be represented by collectibles or real experiences that will allow you to meet and interact with your idols.

The main element of Mario Colabufos’ project is the token of $ELITE, a new cryptocurrency created by the $Elite team. The $ELITE token plays a fundamental role as it will not only represent a purchasable currency usable within the Elite Marketplace as a utility token in its ecosystem but it can also be used within Elimobile and third-party projects in collaboration with $Elite. $Elite is thus giving the token a wide range of utility and great validity, further guaranteed by the staking program designed by the company.

To don’t miss any news about the $Elite project, check out their website:

The post Dubai: $Elite, the new token with influencers like Gianluca Vacchi and Flavio Briatore appeared first on cryptodailynews24.com.