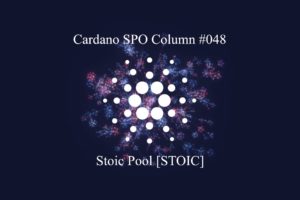 This week’s guest on the Cardano SPO Column is a stake pool created in the UK to help contribute to the decentralization of the network: Stoic Pool [STOIC].

Last week’s guest was a stake pool that is 100% powered by solar and donates 25% of fixed fee to American Forests.

Hi, thanks for your time. Tell us something about you, where are you based and what is your background?

Hey, I’m Rhys, I’m a personal trainer and gymnast based in London. I am involved in a few projects in Cardano and I have a YouTube channel. I believe in building and contributing to the ecosystem rather than trading crypto, which has led me deep down the rabbit hole into some pretty interesting groups of people.

Please give a detailed overview of your stake pool, how does it stand out and what does the future hold?

STOIC is eco-friendly and bare metal, meaning I don’t use shared infrastructure, I own the physical servers that run the nodes. When I started the pool I used cloud servers but last summer I decided to change when I discovered the Armada Alliance.

Now I have a water cooled RaspberryPi stake pool. It’s quite unusual to water cool Pi’s but as they run 24/7 and are generally pretty hot, I thought it would be a fun project to do. So my nodes run at ~22°C and I even water cool the SSDs.

The 4 nodes and water cooling system (fans & pump) all run off about 45W meaning I can power them off solar panels even in the UK!

We also have redundancy measures for power, internet and even more Pis. Redundancy is obviously a very important factor in running bare metal servers. I made a video of the build and talked about the challenges, performance and more on my channel.

You’re part of the Plutus Pioneer Program, what is it? And can you describe the advantages of this programming language?

The Plutus Pioneer Program is a course IOG have run to teach people the smart contract language on Cardano, Plutus.

Plutus is essentially Haskell, a functional programming language. There is a bit of a learning curve there but it results in very reliable smart contracts.

It’s not very straightforward to learn Plutus, especially if you are unfamiliar with Haskell. But if you can put the time in to learn the language well, Cardano’s smart contracts can be very flexible and powerful.

Besides running the stake pool, are you working on any other projects? Tell us more

Yes I find myself getting involved with more and more projects recently.

The main one is StakingDAO, which is an auto-staking platform that enables users to delegate to Groups of stake pools rather than one. The DAO basically balances stake across the network in a ‘set-and-forget’ way for the users.

I also have another project called NFTPass which is an NFT ticketing solution. We have a patent pending and we have a really cool and unique way to enable verification of NFTs without transactions or having to wait for blocks, meaning it becomes a lot more user friendly and faster.

Other than that I am the SPO representative for the Catalyst Circle v3 and am one of the SPOs involved in the FreeLoaderz.io project and a contributor to the ADAO project too.

Awesome. Any final thoughts? Where can people stay in touch?

You can reach out to me on Twitter and check out my YouTube channel if you want to see my node build, learn Plutus and find out more about StakingDAO.

Don’t forget to vote for the StakingDAO Proposals in Catalyst Fund 8.

And of course, delegate to STOIC Pool!

Disclaimer: The opinions and views of the SPOs are their own and do not necessarily reflect those of the Cardano Foundation or IOHK.