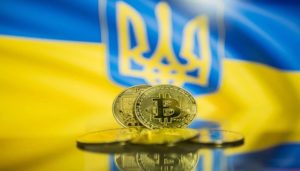 Bitcoin and the winds of war in Ukraine

The recent crisis in Ukraine sees Russia respond to America‘s desire to include the buffer state in the list of NATO countries.

Putin raises the bar of tension in the West by recognizing the sovereignty of the two separatist regions Donetsk and Ljubask.

The Kremlin’s move is much more symbolic than substantive because even if it is true that they recognize two Ukrainian regions as independent, they have already been controlling the areas for years through intelligence.

The Russian President’s speech held the whole world in suspense and obviously also had repercussions on the markets.

Moscow lost 20% of its value, and other stock exchanges around the world were also affected by Putin’s speech.

This coincidence between the cryptocurrency‘s performance in relation to the timing and content of the news about the crisis in the Donbass shows a correlation: Bitcoin reacts to the winds of war.

February 2014 saw what history has handed down to us as “The Crimean Crisis”.

As a result of tension over whether or not to recognize the new government in Kyiv, the Black Sea peninsula went into a state of protest.

The dispute resulted in the separation from the rest of Ukraine thanks also to Russian military intervention.

According to the local government, the government of President Viktor Yanukovych was illegitimate as he had come to power in violation of the Ukrainian constitution.

On 11 March 2014, Crimea declared its independence and on 15 May, the peninsula became part of Russia in a referendum that was won by 95% of the votes cast, despite the UN declaring the referendum null and void. But how did BTC behave in the meantime?

Satoshi‘s currency had only been around for a short time (5 years) and its value at the end of 2013 was around $750 with peaks of $1,200, but in 2014, during the so-called “Bitcoin winter”, it fell back to $250, partly as a result of geopolitical events such as the one just mentioned, and above all the failure of the Mt. Gox exchange with a loss of $450 million.

The price of Ethereum is following the behaviour of BTC, turning red yesterday at around $2500 and back in the green today at $2725 (now).

Gold, on the other hand, is an exception, continuing to rise to $1900 an ounce.

The yellow metal that continues to rise gives us a measure of the seriousness of the moment and the extent of the tensions between Russia and NATO.

Oil is also firmly above $90 a barrel, and compared to the 30/40 of the past few years, this is a cause for reflection.

The price of steel (military industry) follows the trend of gold and continues to grow, as does the price of wheat, both of which, unfortunately, are symbolic values of every war crisis.

The post Bitcoin and the winds of war in Ukraine appeared first on cryptodailynews24.com.