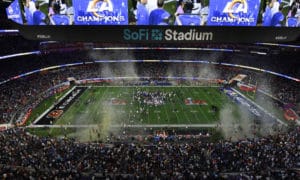 If the aim of Coinbase was to attract curiosity and attention, then the very expensive ($7 million) ad at the last Super Bowl was certainly a very successful operation.

In addition to having recently been named as the most innovative and talked-about ad of all those aired during the highly-followed Super Bowl final in mid-February, the 60-second spot was so successful that it caused the Coinbase app to crash for a few hours due to excessive simultaneous access in the hours following the airing.

But now it seems that a new controversy has arisen around this much talked about commercial.

The issue allegedly concerns the creativity of the 60-second ad (a two-dimensional, full-screen barcode that had to be scanned to be directed to the exchange’s website).

The company’s CEO Brian Armstrong claims that it was all an internal Coinbase idea, but an American advertising agency claimed to have come up with the idea behind the ad.

10/
I guess if there is a lesson here it is that constraints breed creativity, and that as founders you can empower your team to break the rules on marketing because you're not trying to impress your peers at AdWeek or wherever. No ad agency would have done this ad.

In a lengthy tweet on Monday, Armstrong expressed his satisfaction that his marketing team, with a limited budget and little time, had created a highly successful and effective product.

However, Cristian Kareen, CEO of the advertising agency The Martin Agency, responded controversially to Armstrong’s tweet, claiming creative authorship of the spot.

It was actually inspired by presentations our agency showed your team on 8/18 (pages 19-24) and 10/7 (pages 11-18) with ad concepts for the Super Bowl with floating QR codes on a blank screen.

Armstrong responded to the tweet by toning down the controversy and thanking the agency, which along with others had contributed to the commercial.

However, in the same tweet Armstrong reiterated that the full authorship of the creative idea belongs to the Coinbase marketing department.

12/
Although we didn’t work with a traditional ad agency I’d be remiss not to mention the creative firm we worked with who actually created the ad, commissioned the song, got the clearances etc etc. Honestly, felt like we were all one team so I didn’t fully realize it, thank you!