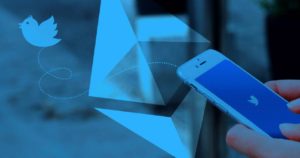 Twitter, the famous social network that has always been very attentive to the world of cryptocurrencies and its evolution, even after the resignation of its CEO Jack Dorsey, a well-known crypto evangelist.

The news announced by Twitter concerns the method of payment, which is extended to Ethereum, and the regulation of bots, allowing them to be clearly differentiated from humans.

As far as bots are concerned, the novelty is not insignificant, given the ever-increasing use that is made of these robotic response and interaction systems.

Until now, it was not possible to clearly distinguish whether certain content was posted by real users or by automated accounts, as there was no difference between the two types of account.

This had caused a great deal of controversy, especially with regard to the presidential elections, where according to some, automated bots had been used for sweeping campaigns for or against a particular candidate.

With the new tweaks, which are the result of experiments underway since last September, a special system of recognition will be activated by means of labels in the feed, located below the name to indicate whether or not it is a bot.

After opening up payments of these so-called tips to Bitcoin in September, the other novelty implemented by Twitter concerns tip payments, which will now also be possible with Ethereum.

Creators of legal age will also be able to receive tip payments in the digital currency founded by Vitalik Buterin, in addition to payments in Bitcoin and via Patreon.

Bitcoin-like payments can only be made on the mobile version, not on the desktop.

“Develop a decentralized internet directly on Twitter and offer creators the ability to turn followers into fans and fans into funds, allowing them to continue to shape culture by holding meaningful conversations with one’s audience”

this would be the company’s philosophy behind accepting payments in cryptocurrencies as explained recently by Esther Crawford, product manager for monetization of creators.