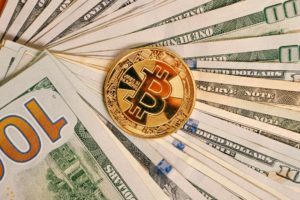 The fight for market recognition of Bitcoin as the main currency in the US and around the world is already history, at least in terms of numbers. The dollar has lost 97% (97.58% as of Wednesday) of its purchasing power against Bitcoin over the past five years, settling at 0.000024.

This striking result goes back a long way and there are at least two main reasons why the gap has widened so much, and both are key to understanding the scale of the virtual currency’s achievement.

For the past 50 years, the CPI, which is not just a recent enemy but rather a recurring problem in finance and the real economy, has reduced the value of the dollar by 85% against BTC.

The virtual currency par excellence, which accounts for 42% of the entire cryptocurrency asset, is deflationary by nature, meaning that every two years it applies corrections in this sense so that nothing can erode its value.

This is why BTC is also considered a safe haven asset and even competes with gold in this niche albeit with differences (more volatile than the mineral, power relations etc).

Whoever puts capital into Bitcoin, invests in a currency whose value has remained high over time and grows over the long term, so it is not easy to buy a single unit which today is worth $43,000 and it usually happens that fractions of the currency are bought so as to enter more easily into this investment.

The dollar is discounting the Fed’s monetary policies.

The problems of the US dollar

Let us also look at the other major obstacle of the dollar.

The greenback suffers and is affected by the Fed’s monetary policies.

In fact, the American central bank issued huge amounts of liquidity in the face of the Coronavirus c19 pandemic as a result of the economic contraction, and it did the same for the 2008 crisis in continuity with the rate changes planned for the current year, drastically reducing the value of the dollar compared to the past.

In 2022, the Fed faces an enemy of all (including cryptocurrencies in some respects): inflation.

The loss of purchasing power of American households will be countered by rate increases, or so it is hoped.

Seven rate increases are planned for this year, spread out over the year starting in March and expected to be 0.5.

Bitcoin today has a total market value of $831.5 billion and one satoshi (a unit of measure that counts the price of BTC in dollars per 100,000,000 and helps to get an idea of the order of magnitude in the field) is now worth 75.24% more than two years ago.

This means that if ten years ago with one dollar we could buy 10656 satoshi today we would only be able to buy 2638.